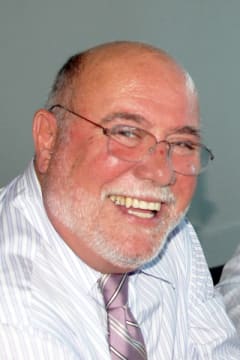 Nick Kavoukas, 77, of Raleigh, NC, died on October 11, 2020 after a hard-fought battle with cancer. He was still smiling and laughing up until the end and passed peacefully at home with his wife and daughter.

Nick was born and raised on the island of Chios in Greece. At the age of 18, he immigrated to the United States in pursuit of the American dream. He met the love of his life, Britt, on New Year’s Eve 1968 and they have shared a beautiful life together filled with happiness and laughter. They celebrated their 49th wedding anniversary this year.

After working for years in home and car audio sales and successfully starting and running his own business, he joyfully welcomed retirement 10 years ago. In 2018, he moved to Raleigh from Northern Virginia to be closer to his daughter, Lina; son-in-law, Jason; and 2 precious grandchildren, Mya and Jake. Papou was the #1 fan at Mya’s basketball games and Jake’s baseball games.

Nick will be remembered for so much. He loved to make people happy with his cooking and conversation and made the best cosmos and nosh you’ve ever had! He was caring, loving and giving to all. He exuded kindness and always saw the very best in everyone. He loved his family and friends beautifully.

He was preceded in death by his parents and brother, George Kavoukas. His life will forever be cherished in the lives of his spouse, Britt and his daughter Lina (Jason Lemons), and 2 grandchildren. He is also survived by his brother Ted Kavoukas, nieces and nephews, and his many beloved friends.

A celebration of life will be held at a later date when we can all gather together to share our memories of a life well lived.

In lieu of flowers, donations can be made in memory to St. Jude Children’s Research Hospital at https://www.stjude.org/

Few people in the world had a greater love for life than my friend Nick. He reveled in it. What a fine example of humanity. We'll miss you.
- Harvey Berliner
There are so many memories, stories, thoughts-all bring warmth, a smile, and comfort that I am blessed to have. Uncle Nick made me feel loved and special with just his genuine smile, jokes, laughter, and kindness. I love you and will miss you.
- Helen
He was so nice and kind. He always had a big smile on his face.
- Sophia
Thanks Nick for doing the best you could to teach me some of the moust important thinks in life. LOVE, LAUGHTHER and HARD WORK. miss. You Love always John
- John Hanssen