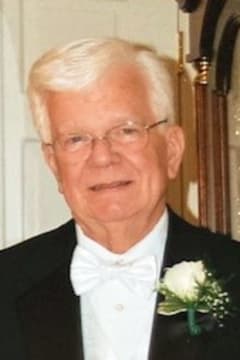 Raleigh, North Carolina- Edwin “Scott” Thomas Sr., MD was ushered into the loving arms of his Savior Jesus Christ on May 19, 2022, while surrounded by family. A native of Asheboro, North Carolina, Scott was the eldest son of the late Edgar Emerson Thomas and Opal Scott Thomas. He was also preceded in death by his sister, Martha Thomas VonCannon (Benny). He is survived by his brother, Mike Thomas and sister, Pat Thomas Coble (Gene) both of Asheboro. He is also survived by his adoring wife of 64 years, Barbara Russell Thomas, and their three children, Beth Tripp (Raymond), Susan Worley (Brian), and Scott Thomas Jr. (Jenny). Scott was a proud grandfather of five grandchildren: Noah Tripp (Maggie), Anna Tripp, Rebekah Mason (Rob), Hannah Worley, and Katie Roebuck (Matt) and one great granddaughter, Lila Roebuck.

Scott studied at Mars Hill College and later obtained both his undergraduate and medical degrees from the University of North Carolina at Chapel Hill. He completed his Internal Medicine Residency at Geisinger Medical Center in Pennsylvania then made his way to Cary, NC where he served as one of the first physicians in his beloved town, opening a practice that he managed for 32 years. Scott later served as the Medical Director for the North Carolina Central Prison in Raleigh and was on staff at Rex Hospital and Wake Medical Center. Scott invested deeply in the growing Cary community during that time. He lent his gifts to the town of Cary by chairing Cary’s Centennial Celebration and served as the Cary High School Band physician. He was also a member of the Board of Trustees for BB&T. Recreationally, Scott often made time to watch and play tennis and he never missed an opportunity to cheer for Carolina Tarheels Basketball. He was an avid reader and spiritually influenced by RC Sproul, John Piper, Sean Cordell and others.

While growing up in Asheboro, Scott developed a great love for music that carried throughout his adult life. He played the tuba in the Asheboro High School Band and offered his beautiful tenor voice years later in the Choir at Providence Church. Scott treasured God’s Word and was a student and leader in Bible Study Fellowship in the Raleigh and Cary men’s classes.

The greatest joy of Scott’s life was his beloved wife, Barbara. They were high school sweethearts who met in the 8th grade demonstrating life-long devotion to God, each other, and their family. Scott’s life will forever be marked by his humble and gentle spirit. To his children, he is remembered as an amazing Dad who was loving, forgiving, funny, and generous.

Family will receive friends at 1:00 pm on Saturday, June 4, 2022 at Providence Church- 6339 Glenwood Avenue Raleigh, NC 27612. Following, a Memorial Service celebrating Scott’s life will be held at 2:00 pm in the Amphitheater.

The family would like to express their deepest gratitude for the love and support of Scott’s caregivers Agatha and Tabitha also for the compassionate care and guidance that Transitions Life Care offered. In lieu of flowers, contributions can be made to Treasuring Christ Church, 3101 Rock Quarry Road, Raleigh, NC 27610, where Scott and Barbara are members.
Condolences:RFHR.com