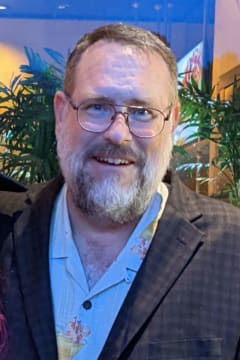 David was born April 22, 1962 in Indianapolis, Indiana. He attended Holy Spirit grade school
and Warren Central High School. He earned his degree in Computer Science with a minor in
Theater from Indiana University in 1987. He worked for IBM for 32 years, and most recently held the title of Senior Security Architect. Over the course of his career, he was named Inventor on more than 19 security patents in the US and abroad.

David was an avid amateur magician with a passion for the theater, and enjoyed collecting
magic tricks, stamps, pint glasses, figurines, coasters, and board games that he could share
with his family. He was a proud volunteer at each of his five childrens’ schools, as well as their scout troops and swim teams. His love for travel brought him to five continents and dozens of countries where he took hundreds of photos, mostly of lamp posts. He joined the St. Mary
Magdalene Catholic Church parish early in its establishment.

David was the son of the late Raymond and Patricia Kuehr. His life will forever be cherished in the lives of his children Mabel, Henry, Rose, Alice, and Grace Kuehr-McLaren. He is survived by his six siblings Jeanne Ann Lausten, Rosanne Bordenkecher (Steve), Steven Kuehr (Stephanie),
Jeffrey Kuehr (Laurel), Kevin Kuehr (Kathleen), and Geralyn Koehler (Mike). He is also survived by his former wife, Isabel McLaren, as well as a host of devoted nieces, nephews, cousins, aunts, uncles, neighbors and friends.

The Catholic Funeral Mass will be held at 11:00 AM on Thursday, January 12, at St. Mary Magdalene followed by a celebration of life at Apex Senior Center, 63 Hunter St, Apex, NC 27502 on the first floor. This will take place immediately following the service and conclude at 2:30pm.

In lieu of flowers, his family requests a donation in his name to the Food Bank of Central and
Eastern North Carolina.