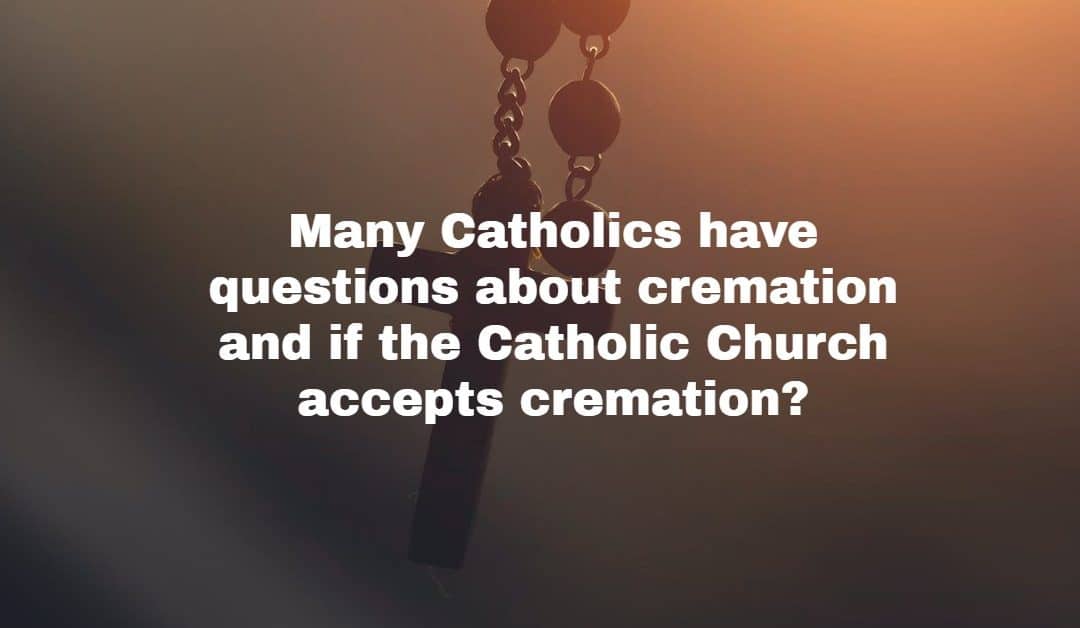 A cremation urn being placed in a Columbarium

THE CATHOLIC CHURCH AND CREMATION

Q. As a Catholic, may I be cremated?

A. Yes. In May 1963, the Vatican’s Holy Office (now known as the Congregation for the Doctrine of Faith) lifted the prohibition forbidding Catholics to choose cremation. This permission was incorporated into the revised Code of Canon Law of 1983, and its liturgies were written in the Order of Christian Funerals. At that time, it was standard practice to celebrate the funeral liturgies with the body present, and have the body cremated following the ceremony. More recently, however, the bishops of the United States and the Holy See have authorized the celebration of a Catholic funeral liturgy with just the cremated remains present.

Q. Do I need to ask permission to be cremated

A. No, but it is a good idea to inform the Pastor of your intention

Q. Can I scatter the ashes? May I keep the ashes on my mantle?

A. No. The principle of respect for the cremated remains of a deceased Christian embraces the deeper belief in the individuality of each baptized person before God. Throughout history, the mingling of remains has never been an accepted practice, except in extraordinary circumstances.

Q. When should cremation take place?

Q. Who decides if I am cremated?

A. You make the decision to be cremated while you are alive. However, your survivors could decide for you if your desires are not previously known. Rarely is it necessary to act against your wishes.

Q. How do I make my wishes known?

A. You can make our wishes known by informing the loved one who will be responsible for your funeral, or in documents designed to help plan and prepare your funeral. (They are available from a funeral director). It is not a good idea to specify your funeral arrangements in your will, because it may not be read until some time after the funeral.

Q. Must I honor my parent’s or spouse’s desire for cremation?

A. Out of respect for loved ones, you will want to do all you can to carry out the wishes of the deceased concerning funeral services, provided they are in keeping with Church practice. You should keep in mind, however, the therapeutic value to the survivors by celebrating the funeral liturgy with the body present. This may outweigh your reasons for a liturgy with only the cremated remains present.

Q. Is it necessary to embalm?

A. When cremation is to follow soon after death, embalming is not necessary. When cremation follows the funeral liturgy, embalming is usually required. Each state has its own regulations in this matter, but generally the rule is that a deceased human body that is not buried or cremated within 48 hours is to be embalmed or refrigerated.

Q. Is it necessary to purchase a casket if I am cremated?

A. No, it is not necessary to purchase a casket for cremation. If you choose to have the body present for the funeral Mass with cremation later, then rental of a casket is an option. Most funeral directors offer casket rental.

Q. What is the proper container for cremated remains?

A. The U.S. Bishop’s Committee on the Liturgy has determined that urns must be simple and unadorned. Ostentatious urns, statuary, and space capsules are examples of “designer” containers now being offered that are unacceptable in Catholic funeral practices. It is also unacceptable to have any part of the cremated remains be made into jewelry, dishes, art works, etc.

Q. If I choose cremation, is it necessary to call a funeral home?

A. Yes. In North Carolina, a registered funeral director always performs the cremation. It is important to note you are not required to have a viewing of the body at that funeral home.

Q. Can a family member be present at the cremation?

A. Although not customarily done, family members may choose to be present during cremation.

Q. How are the cremated remains transported to the church?

A. Typically, the cremated remains are delivered directly to the church by the funeral director at the time of the funeral.

Q. Must cremated remains be buried or interred?

A. Yes. Respectful final disposition of cremated remains requires burial, or internment in a columbarium, as a final permanent resting place.

Q. What funeral rites are celebrated when a person is cremated?

A. In the Order of Christian Funerals, the United States bishops have included prayers that are used when the cremated remains are present in a church. The following rituals may be celebrated:
• Prayers After Death
• Gathering in the Presence of the Body
• Vigil for the Deceased
• Funeral Mass or Funeral Liturgy Outside Mass
• Rite of Committal

Q. Should I schedule a funeral Mass before or after cremation?

A. The Church prefers cremation after the funeral Mass. However, an indult has been granted by the Holy See which provides for the celebration of the Mass with the cremated remains in church.

Q. Do I need permission to have cremated remains in church for the funeral liturgy?

A. The indult granting authority to perform a funeral liturgy in the presence of cremated remains (in place of the body) requires a bishop’s authorization. Although the Bishop of the Dioceses of Raleigh has authorized it, it is customary that you inform the Pastor prior to cremation.

Q. What duration of time occurs between death, cremation, and the funeral Mass?

A. The answer to this question depends on various factors, such as the place of death, scheduling a time for cremation, the Church calendar, and the schedule of the parish. Consult your funeral director and the parish office for details.

Q. What happens at the funeral Mass with cremated remains?

A. A journey, which began at baptism, comes to conclusion as we enter into eternal life. Significant attention should be given to the primary symbols of the Catholic funeral liturgy, as stated in the Order of Christian Funerals and its commentaries. The paschal candle and sprinkling with holy water are primary symbols of baptism and will be used during the Mass.

During the funeral Mass, the cremated remains are treated with the same dignity and respect as a deceased body. The remains are sealed in an urn, which is carried in procession by pallbearers (usually two), and set upon a table where the coffin would normally be placed.

Photos and other mementos may be used at a vigil, but are generally not appropriate during the Mass.

Q. How much time elapses from the funeral Mass until the remains are interred in the columbarium?

A. If the body is present at the funeral Mass, the funeral director will advise you on the time necessary to do the cremation. It is usually a day or two. The internment then follows shortly thereafter.

If the cremated remains are present at the funeral Mass, typically internment immediately follows the Mass.

Q. Is a ritual conducted when the remains are interred in the columbarium?

A. Yes. The Rite of Committal is very similar to the service conducted at a gravesite in a cemetery.

We can answer any of your cremation questions, simply call us or email for more information
photo credit https://www.flickr.com/photos/opalandtheidiot/