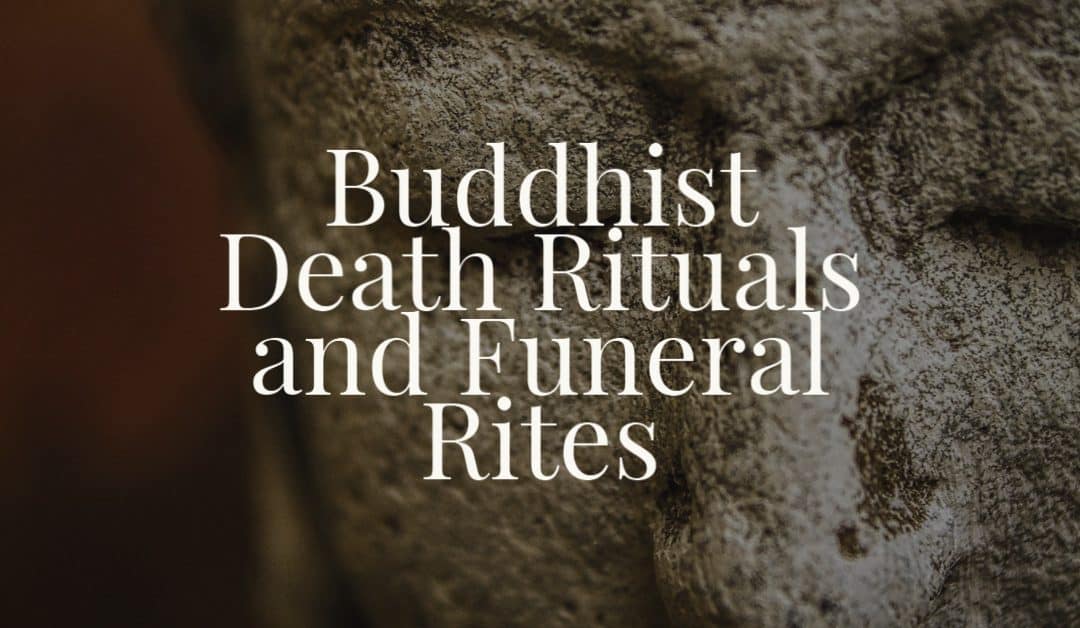 Death rituals and funeral traditions vary as much as different cultures. Buddhism is no different in that there are established protocols unique to this religious tradition, just as there are in every other. Let’s take a look at Buddhist Funeral rites and death rituals.

Beliefs About Life and Death

Most Buddhists understand that death is not the end but instead a transition to another form of life. However, as in many faiths that believe in an afterlife, mourners still acknowledge their grief to one another.

Much of daily life as a Buddhist involves understanding that your life is short but that you can give it meaning by how you choose to live. Living in constant mindfulness and staying present throughout each day are ways Buddhists engage in the practice of their religion.

Buddhist funerals are simple and usually occur in a temple, a funeral home, or a family home. Where the service is held depends on the families involved and what their religious traditions are. According to The Buddhist Society, “The Buddhist tradition is very diverse, and there is no single funeral service or ritual common to all Buddhists.”

Is There a Wake?

A wake is when mourners can pay their respects to the deceased and express their condolences to the family. Incense burning, flowers and fruit, candles, and a portrait of the deceased person in front of the casket are all part of the wake. Buddhist tradition places an image of Buddha near the altar as well.

Do Buddhists Bury the Dead?

Buddhists typically favor cremation because they believe it is an important way to release the soul from the physical form. Buddha himself was cremated, so his followers often follow his lead. But burial with embalming is allowed, too. Buddhism also allows the donation of organs and autopsies.

“Some Buddhist traditions say that at least 4 days should pass before the body is cremated and that embalming should be avoided if at all possible. The general advice is that the body should be left as undisturbed as possible in the interval between death and cremation or burial.” (1)

Should I Send Flowers?

You can send white flowers to the family before the service. Red should be avoided and never sent. Sending gifts of food is acceptable but no red. Donations to charities are also acceptable. Visitors often make a financial donation to the family.

The Tone of a Buddhist Funeral Service

If you attend a Buddhist funeral, you should respect the somber occasion by being very quiet. Sometimes the family will choose a monk to officiate. Other times, if they are religiously also practicing another faith in addition to Buddhism, a minister or priest will lead the service.

In most services, there is prayer and some meditation. In the Buddhist tradition, there are many ways to express a spiritual connection. Often the deceased’s family will know which Buddhist tradition is most appreciated by the deceased. Buddhism sects include Zen, Tibetan, Theravada, and Pure Land. However, even within each sect, there can be varying beliefs, especially if they have roots in different world regions.

Mourners may also choose to engage in these traditions at the wake, funeral service, or gravesite.

What Happens When I Arrive at a Buddhist Funeral?

When you arrive at a Buddhist funeral or wake, you should quietly proceed to the altar. Buddhist funeral etiquette calls for mourners to take a slight bow with their hands folded in front of them in a prayer position. You may then stay for a while or leave, according to your personal preference.

You will then find a seat and wait for the service to start. Follow others’ behavior as far as sitting or standing. If others stand, you should stand also.

The service usually consists of sermons, chanting, and eulogies delivered by monks or other Buddhists that knew the deceased. There may be meditation. Mourners should join in the chanting or sit quietly if they are unable to.

What Should I Wear to a Buddhist Funeral?

The family typically wears white to a Buddhist funeral, while friends may wear black. Bright colors are never appropriate, and neither is a display of wealth in the choice of clothing. In Buddhism, red is the color of joy, so it is not an appropriate color to wear to a Buddhist funeral or as a color for flowers, fruit, incense, or food that you give to the mourning family.

Be sure to remove any head coverings during prayer.

Because of the diversity in religious expression in the Triangle area, we have experience with grieving families of every religious tradition. If you have lost a loved one, we would like to meet your needs as you begin the grief journey and move toward healing from your loss.