Should You Say “Passed Away” Or “Died?” 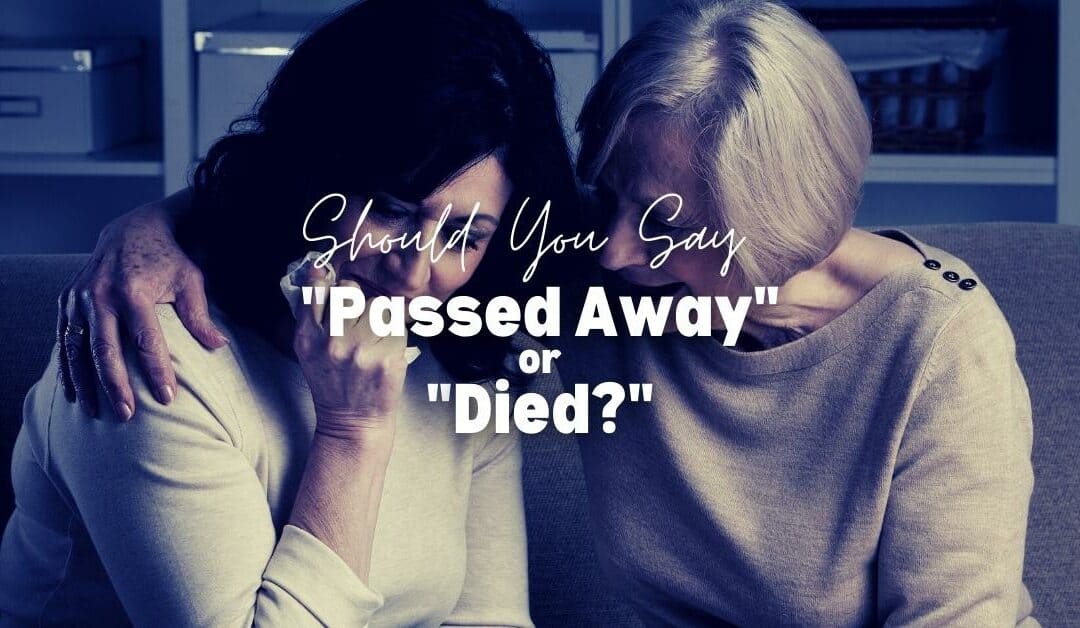 When a loved one dies, it can be challenging to cope with the loss. You may hear others say that your loved one “passed away” and wonder what that means. While “passed away” is a euphemism for death, many religions believe that a soul passes on into another realm after death. This is where the idea that someone “passed away” comes from.

Let’s look at what “passed away” and other euphemisms mean and what to say about the death of a loved one.

What Does “Passed Away” Mean?

We first see the term “passed away” appear in English writings of the 15th century.  In the 1400s, the majority of individuals believed that the departing of the soul of a dead person was a literal physical event.

“Passing away” meant that the deceased person had begun their soul’s journey to heaven or hell. (1)

Why is “Passed Away” Used as a Euphemism for Death?

A euphemism is a way of saying something without coming out and saying it. People use euphemisms when they don’t want to say a word that might upset or offend someone else. The term “pass away” is one of the oldest euphemisms known in English.

Many individuals don’t like to think of death when thinking of a loved one who died because it sounds so final. They may say or want to hear others say “passed away” as a calmer and gentler way of talking about death.

They might also use or prefer other euphemisms for death, such as:

Do All Religions Believe in a Soul?

You may wonder which religions believe in a soul. But first, let’s define “religion.” According to Mark Stibich, Ph.D.,

“Religion is a set of organized beliefs, practices, and systems that most often relate to belief and worship of a controlling force such as a personal god or another supernatural being. While this is a basic definition, there are many different understandings of what religion is and not all religions are centered on a belief in a god, gods, or supernatural forces.

Religion often involves cultural beliefs, worldviews, texts, prophecies, revelations, and morals that have spiritual meaning to members of the particular faith, and it can encompass a range of practices including sermons, rituals, prayer, meditation, holy places, symbols, trances, and feasts.” (1)

With that definition in mind, many individuals have religious beliefs in the US. However, many belief systems are also eclectic and may or may not include belief in a soul or an afterlife.

What Do Different Religions Believe About a Soul?

According to new findings from Pew Research, most US citizens believe in a soul. In their 2021 study Views on the Afterlife, “Nearly three-quarters of U.S. adults say they believe in heaven.” Many religions in the US believe in some form of an afterlife for the soul.

Here are a few examples:

Muslims believe in angels and jinn (spirits). They also believe in the Day of Judgment, when everyone will be resurrected and judged according to their deeds. Many of the same prophets in the Muslim religion are the same prophets mentioned in the Old Testament of Christianity. In Islamic beliefs, after judgment, the righteous go to paradise. The Muslim holy book is the Quran.

Jews believe in the immortality of the soul. They also believe in a messiah who will come to save them and usher in a time of peace. However, most Jews reject the Jesus of Christianity as the Messiah and are waiting for the Messiah to come. Jewish and Christian religions both honor the Old Testament in the Bible as a religious text. After death, Jews believe the soul goes to a place called Sheol until the Messiah comes. Their souls will resurrect at that time and go to heaven if they’ve obeyed the law well.

Hindus believe in reincarnation and karma. They believe that the soul is reborn into another body after death and that this cycle continues until they reach Nirvana (a state of perfect happiness). How a person is reborn depends on their karma (the good or bad deeds they’ve done in their past life). Karma is the idea that our actions have eternal consequences.

Buddhists believe in reincarnation and karma as well. However, they also believe in nirvana, a state of perfect peace while living on earth. They believe that you can attain nirvana through good deeds and living a moral life.

As you can see, there are many different major belief systems about what happens to our soul at death. Many other religions or belief systems have other beliefs about the soul or an afterlife.

Which is Better to Say? “Passed Away” or “Died”

While “passed away” is a euphemism for death, it is also a literal description of what many believe happens to our souls after we die. Because of this, the term “passed away” may feel comforting to most Americans.

However, because it is a euphemism that many people say, regardless of religious beliefs, you probably won’t go wrong by saying “passed away” or other similar comforting terms. You can watch the other family members if you wonder what they prefer to hear.

However, if someone does not believe in an afterlife, it’s unlikely they will think you mean it as a religious term and feel offended. “Passed away” and “pass away” are common terms that people use regardless of their belief systems.

If you’re concerned about what to say at a funeral or to someone grieving, check out some of our other blogs and find meaningful ways to engage with those who face a loss.

If you have a loved one who has died or “passed away,” we can help. At Renaissance Funeral Home and Crematory, we help you create beautiful and memorable events to honor your deceased loved one. Our caring and understanding guidance can help you make the meaningful but difficult decisions you must make during this time of grief.

Our experience with many different belief systems means that we respect you and your traditions, whatever they may be.  We provide a wide range of services to ensure that your services honor your loved ones as they would desire. Contact us today and find out how we can help you plan a beautiful tribute to your family member.