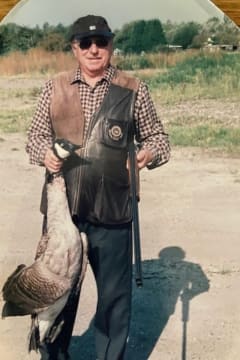 He was the eldest sibling, and as such was engrained with the nature to mentor and sacrifice for others. William received his formal education from the East London Catholic Schools. William was a member of the British Armed Forces and was noted as serving with distinguished services during his early years. But found that he had a greater passion for woodwork and he became a master carpenter and managed furniture factories. One of his distinguished woodworking achievements was that he was the first framer of the recliner in the United Kingdom. William was an avid clay & trap competitive shooter and has won many trophy’s for his shooting.

William was married to his beautiful bride Margery Parker for 70 years. The blessing of their union was that of 3 daughters. William was a loving father and a caring devoted husband and as in his youth, William was always thinking of his family and others first. William is cherished in memory by his three daughters, six grandchildren, and a host of nieces and nephews.