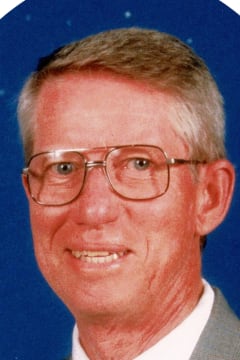 W. Dale Jayes of Raleigh, NC, died Sunday, September 12, 2021, at the age of 90 after a long battle with Parkinson’s Disease and the related dementia. He was born in Toronto, the son of the late Walter George and Marguerite DeRousie Jayes. Dale grew up in Cornwall, Ontario, graduated high school from Cornwall Collegiate & Vocational School, and then earned a degree in electrical technology at Ryerson Institute of Technology in Toronto, followed by an industrial engineering degree from Georgia Tech. This would lead to a 33-year career with Westinghouse Electric Corporation, primarily in Raleigh and Athens, GA.

Dale’s greatest joy was his 63-year marriage to Miriam Kyte Jayes (Mirilou). Together, with their three children, they enjoyed regular trips to visit family in Cornwall, as well as many camping trips, from Nova Scotia to the Florida Keys. After Dale’s retirement, they cherished trips to many other countries as well. Dale particularly enjoyed sailing over the years on Lake Gaston and Lake Lanier. In his quiet moments, Dale was an avid reader with a strong interest in history and non-fiction.

Dale is preceded in death by his parents, Walter and Marguerite of Cornwall; his sister, Hilda Levi of Chattanooga, TN; and his granddaughter, Christina Jayes of Raleigh.

Dale is survived by his wife Mirilou; his son, Kevin (Friederike) of Cary, NC; his son, Brent (Diana) of Raleigh and their son, Austin; his daughter, Jennifer Whichard (John) of Rocky Mount, NC and their son, Zachary, (Lindsey), and their sons, Ryder and Silas; his sister, Marcia Tughan (Ron) of Nepean, ON; and many nephews, nieces, and friends.

A visitation will be held from 6:00-8:00 p.m. on Thursday, September 16, 2021 at Renaissance Funeral Home and Crematory, 7615 Six Forks Road, Raleigh, NC 27615. Dale will be laid to rest Friday at Pine Forest Cemetery, Wake Forest, in a private family service.