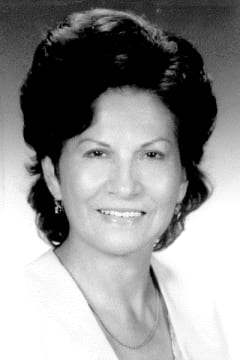 Violeta was a true matriarch in every sense – wise, firm but fair, had a nobility about her, and yet was humble and kind. It is no wonder that several of her closest friends lovingly called her “Queen Violeta.”

She loved to laugh at a good joke and would eagerly be your partner in a harmless prank. “Spunky” was a good way to describe her. Violeta loved to sing. She sang lullabies to her children and sang with the church choir. She was athletic, played volleyball, enjoyed horseback riding, and ran track in her youth. She tried her hand at the guitar and harp but played only for the entertainment of her family. She loved all forms of dance and even tried flamenco lessons.

As a teacher in Peru, Violeta loved all the children, using her talents to instruct at the elementary and middle school levels. In 1956 she met her first husband while taking classes to learn English. The instructor, Tobie, was teaching English to adults prior to his first assignment as a US Foreign Service Officer specializing in Latin American Affairs.

As the wife of an overseas diplomat, she lived in numerous countries while raising her children, including Brazil, Columbia, Venezuela, and Afghanistan. She defended her children from revolutionaries, planned social events for hundreds of foreign dignitaries at her home, and somehow got her family an audience with Pope Paul VI who personally blessed all three of her children.
Violeta’s faith was at the forefront of whatever she said and did. She developed close relationships with the clergy of whichever church her family happened to be attending at the time. She would often remind her children that GOD loved them and watched over them.

Upon moving stateside to Bethesda, Maryland in 1971, Violeta displayed the necessary strength needed to be a Hispanic wife in a mixed marriage. Her children learned from her example, all three with the strength and determination to become independent business owners as adults.

Violeta obtained her real estate license while living in Maryland and focused on helping Hispanics overcome the hurdle of purchasing a home, and for many of them their first home. She also encouraged and mentored other Latin Americans to follow in her footsteps.

Violeta’s second marriage was to John Sommer in 1993. They met playing bridge, which they both enjoyed. They lived first in Bethesda, then in Brooklyn NY, during which time they attended numerous bridge tournaments around the country. In 2013 Violeta and John moved to North Carolina, and lived in Durham until her death.

Among Violeta’s many gifts/talents, was her ability to create virtually anything with a needle and thread. She sewed clothes for her children at every stage of their growth including wedding gowns and designed her own clothes. In her fifties she designed and fabricated a splint to alleviate her personal discomfort with a condition known as Trigger Finger. Ultimately, she obtained a patent for the design which became the basis for other such braces now available to the general population.

Violeta was a true blessing to her family, friends, and most anyone she crossed paths with. Violeta is survived by her spouse, John Sommer and three children: Pierre Surprenant (son, Christian), Sally (Richard) Williams (daughters, Nancy and Angela), and Nancy Micaela (Andreas) Bracamonte Olsson (sons Julien and Pascal).

Due to COVID-19, we will be LIVE streaming the funeral through YouTube. Please go to the following link on Friday, December 18th at 12:30pm: Renaissance Funeral Home YouTube Page