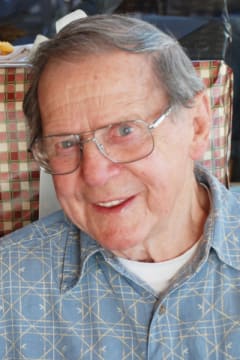 Vincent Robert Pribish, died August 28, 2020, just 22 days from turning 100, at his home in Raleigh, NC with two of his daughters and his wife at his side. He was born September 19, 1920 to Anna (Kruckofsky) and John Pribish in Poughkeepsie, NY, both immigrants from Czechoslovakia.

He lived in New York for 55 years, Maine for 40 years and Raleigh, NC for his last 5 years. He led an incredibly varied life from a religious Marist Brother, John Ignatius, a nuclear physicist at Brookhaven National Lab, a science and math teacher, a college professor, an architect, a builder, an entrepreneur, and an inventor with several patents.

Vincent was a dedicated, loving husband and father of seven. He married Nora J. McNally in 1953 had two daughters. Nora died suddenly on January 4, 1968. He then married Dorothy A. Caggiano in 1973 and had five more children. Religion was the center of his life, he was a 4th degree Knight of Columbus, at Most Holy Trinity Church in Saco, ME. Vincent was the head of the RCIA, a Eucharistic Minister, and served in other capacities. He enjoyed boating, fishing, photography, card playing and traveling.

A Memorial Mass and Inurnment in the Columbarium at St. Francis of Assisi Church in Raleigh, will be delayed until family can travel safely from all parts of our country.

Over the past 61 years, I have addressed him as Mr. Pribish, Vinnie, and Vin, starting with the formal salutation of Mr. Pribish when just a mere tiny tot of three, when he first moved into the home he built for his family on 55 Railroad St, right behind my own. One of my earliest childhood memories is peaking out of our bathroom window with curiosity to watch him on his back porch with his two tiny daughters. These were to be my new neighbors. Wow! How excited I was! Essentially, that was my first glimpse at three people who were to become lifelong friends. Who would ever have guessed that day that my life was about to change forever in a magical way. Mom and Dad had contemplated buying that lot, and had they gone ahead with that purchase, my whole family would have lost a treasure much more valuable than that piece of land -- the friendships and love we came to know through Mr. Pribish and his family. Fast forward ahead to today and I want to express to his dear family how blessed I am to have had Vinnie play an important role in my life, in teaching me as a youngster and young teen some important principals of life, such as what it means to enjoy life, to appreciate humor, to treat others with respect, and to seek answers using the information already available to me. His gentle guidance soundly prepared me for the career I later chose as a wildlife conservation biologist and scientist. Best of all, Vinnie's choice to plant his family on Railroad St over 6 decades ago ended up bringing me profound happiness over the years, along with a myriad fond memories through the many Pribish friendships that have blossomed as a consequence. Here's wishing you a super happy 100th birthday today Mr. Pribish, Vinnie, Vin. Cheers to a life exceptionally well lived and to a man whose memory will always bring a glow to my heart and a smile to my face! Much love, Jo Anne Smith-Flueck
- JoAnne
I had the privilege of meeting Vincent fifteen years ago and working with him for several years. I will never forget some wonderful technical conversations we shared. Like all great teachers, Vincent enjoyed connecting with students. When he talked with me about physics and chemistry, he'd looking directly into my eyes and he'd watch me process his words. When he'd see my eyes "light up" because I grasped the concepts of what he was saying, he'd break into a beautiful smile, proud and happy of the accomplishment of sharing his knowledge with another. I appreciated and respected the times I got to spend with Vincent, and the wonderful stories of the history that he lived through. I will miss him. Dana Hodgkin
- Dana Hodgkin