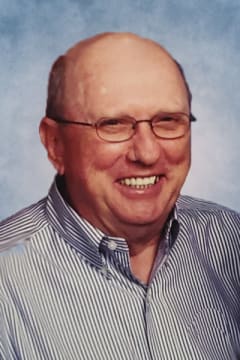 Van was a proud Army veteran. After a honorable discharge he spent many years in management in the food service industry. Then he attended Kings Business College where he received an Associates Degree. He also attended NC State for additional education. He worked many jobs in the sales field including real estate and was a member of the Raleigh Board of Realtors. As he approached retirement, Van ended his career with a small used car business. Van was an active member and usher at Crossroads Fellowship Church since 2000.

Van married Catherine Hicks on December 30, 1958. Van and Catherine had a very loving and respectful marriage of 62 years. He had deep love of God, Family and Country. Van would spend time listening to Elvis Presley, rock and roll and Gospel music. He also enjoyed classic cars and carrying on a conversation with anyone that would give him a few minutes of their time.

**Face masks will be required to attend the service.**

The service will stream live on Renaissance Funeral Home Facebook Page
In lieu of flowers, donations can be made in memory of Van to The Wounded Warrior Project

To the Watkins family. Sorry to hear of your loss. My father Rick Chandler passed away a few years ago thought a lot of Mr. Watkins. Sorry I could not pay my respects in person today.
- Ryan Chandler
Even though I didn't get to see Uncle Foster that often I do have a lot done memories. I remember as a child when he came to Henderson to visit he'd be on one of his Corvetts. He'd joke & ask if I wanted to drive it. He'd laugh & say " you got your license, right?" I remember him & Catherine coming to the hospital to see me when my daughter was born and I was thrilled to find out they shared the same birthday. Their visit meant so much. I remember going to his baptism. I remember that being such a happy & proud family day. I remember going to Thanksgiving dinner at his house the first Thanksgiving after daddy died. That really meant a lot to us to be invited & to be surrounded by family on our first holiday without daddy. The last time I saw Uncle Foster was at my cousin Donna's memorial service. I'll always remember how Uncle Foster could make me laugh & how he never met a stranger. And my mama saying that my daughter, Taylor must have some of her Uncle Foster in her because as many times as she's moved over the years. You'll be missed Uncle Foster. I know Granddaddy, Grandma, Daddy, Eleanor, Barker Jr, & Betty Jean all met you at the pearl gates with rejoicing & open arms. You are loved & will be missed. Our thoughts & prayers are with Catherine, Sammy, Sandra, Van, Mike & all of the grands.
- Gina Watkins
My heart goes out to all of you, praying the God of comfort to be with each of you as you go through this difficult time. My memory is the first time I meet him he was being baptized, he was nervous so I prayed with him, he invited to come to his house for lunch, that was the beginning of our awesome friendship, I will truly miss his smiling face and joyful spirit.
- Ginny Bradshaw