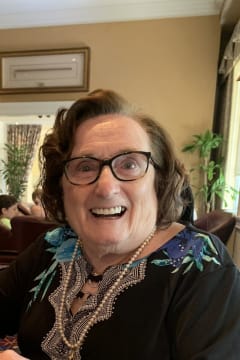 Stephanie grew up in Summerhill, PA and was the oldest of four children. She graduated from Mount Aloysius Academy (high school class of 1957) and Mount Aloysius Junior College (class of 1959) in Cresson PA, after which she attended Pennsylvania State University, in State College PA.

On July 21, 1962 she married Francis (Frank) Edward Dorsch, who was an engineer with Western Electric (AT&T) and they spent their honeymoon in Bermuda while Frank was working on a project for the Navy. In addition to Bermuda, she traveled with Frank on some of his trips to Hawaii, Japan, Hong Kong, Spain, Turkey, and the United Kingdom.

In addition to her international travels, Stephanie enjoyed her family’s annual trips at Christmas and in the summer to her childhood home in Summerhill, PA where the extended family would gather for holidays.

After raising her four children, she became a realtor with Lanier Williams Reality in Winston-Salem.

Stephanie was a devout Catholic and faithful member of St Leo the Great Catholic Church in Winston-Salem, where she was active in St Theresa’s Guild from 1998 to 2013.

Stephanie loved to read and enjoyed the arts. She had the gift of creating beautiful flower arrangements, and she was a long-time and beloved member of the Forest Garden Club in Winston-Salem, and a National Garden Club Accredited-Master judge. She judged shows in Tennessee and North Carolina. She also had the most infectious laugh that made others want to keep her laughing once she started.

Stephanie was diagnosed with Early Onset Parkinson’s in her 40’s and became very active in lobbying for Parkinson’s research funding. She was instrumental in starting Parkinson’s support groups in Winston-Salem and in Durham, NC. In 2015 she authored a book entitled “My Uninvited Guest” which detailed the first 28 years of her life with Parkinson’s Disease.

Stephanie was interred at St Leo the Great Catholic Church in Winston-Salem on Thursday, May 6, 2021.

In lieu of flowers the family requests donations be made in the name of Stephanie Dorsch to the Movement Disorder Clinic at Duke University. Donations can be made by mail to the following address:

We wish to extend our deepest condolences on the recent loss of your wife, mother, and grandmother. Emil Dorsch's granddaughters: Rhonda, Alexis, and Susan
- Rhonda Pohopin