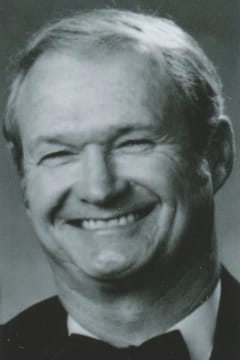 Spencer Rollins Mims Jr. died November 3, 2022 in Raleigh, NC. He was ninety-two. Spencer was born September 9, 1930 in Durham, NC, the son of Spencer Rollins Mims Sr. and Madlynn Eloise Poole Mims and was a ninth generation descendant of the colonial Mims family of Virginia and North Carolina.

When he was eleven his family moved to Henderson, NC and during high school he discovered his passion for music and began learning to master the trumpet. This ignited his lifelong work in both performance and music education. He liked to recall that he played “paying gigs” from the age of sixteen until into his eighties. “Rollins”, as he was known then, had a great sense of humor and won the wittiest superlative of his senior class.

After instruction under band director W. Tom Hearne at Henderson High School he attended East Carolina University, majoring in Music Education. At East Carolina he was fortunate to perform in The Collegians big band (director Herbert L. Carter’s “The Best Band in Tarheel Land”); a talent incubator where he met lifelong colleagues and friends. Best of all, while at the university he met and married the love of his life and wife of forty-four years, Mattie Brown Stancill, who was from a Greenville, NC farming family. After graduating from East Carolina he began his career as the high school band director at Roxboro, NC, later moving his growing family to Charlotte, NC where he taught band at Charlotte Technical High School, ultimately landing a position as concert/marching band director at newly built Myers Park High School. By this time, he had spent several summers at the University of Illinois Urbana-Champaign studying to obtain his Master’s degree.

During his decades-long tenure at Myers Park he transitioned from band to orchestra while also teaching at Alexander Graham and Sedgefield Junior High Schools. He served on the All-State Orchestra auditions and judging committees and the orchestra participated in juried music festivals and contests. Notably at Myers Park, he was the coordinator/conductor of twenty-one annual, large scale musical productions; fusing the dramatic, orchestral, choral, set design, and costuming talents of students and faculty into multi-day, sold-out performances. Many former students regard these musicals as the pinnacle of their Myers Park experience. Spencer valued mentoring the personal and educational development of his students, and believed that experiential learning and the impact of good teaching could span generations. He maintained lifelong friendships and contact with many of his students through the years.

Spencer also employed his conducting and choral skills as director of the Charlotte Boys Choir (New York and Florida performances), coordinating music scores for the Arthur Smith Studios, and as the decades-long Minister of Music at Mouzon United Methodist Church where he and family were members. Mouzon services were music filled, often including special performances with guest vocalists accompanied by some of his students, his children, and their circle of musical friends. Music played an important role in his family and all three children learned to read music, play an instrument, and sing.

In addition to his classical performance for weddings, various ceremonies and the Charlotte Symphony Orchestra, he played with many prominent swing and jazz groups of the Charlotte area music scene including The Billy Knauff Orchestra, The Loonis McGlohon Band, Neil Griffin’s band and Bennie Jones’ band. During the latter decades of his career he played primarily in the Just Us band and the Seventh Street Gator Band with steadfast friend and colleague, drummer Andy Anderson. He also played for touring events visiting Charlotte such as the Ice Capades, Ringling Brothers Circus, the Charlotte Summer Theatre, and John F. Kennedy’s 1960 Charlotte Coliseum speech. On any Saturday that he had no gig booked, he knew the phone would start to ring; it was “first come first served” and he would soon be headed out the door, trumpet case in hand.

A special joy for Spencer was the arrival of both of his beloved grandchildren. He relished being a part of their lives and watching them develop into successful adults.

His other interests included literature, film, history and genealogy. He had a generous spirit, and supported those in need in the community. He loved dining out, treating his extended family to countless restaurant dinners. Spencer also enjoyed the North Carolina coast, holidays with family, grilling steaks and playing badminton in the backyard, The Andy Griffith Show, reunions at the Stancill farm near Greenville, UNC basketball, BBC television, Southern cuisine, and the atmosphere of city nightlife.

Spencer appreciated the many kindnesses shown to him by residents and staff of the Springmoor Life Care Community since his moving there in 2014.

A Celebration of Life will be held at Springmoor Life Care Community, 1500 Sawmill Rd., on Saturday December 3 at 2:00 pm.