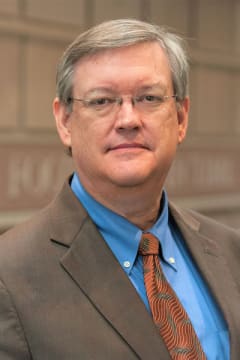 Samuel McDonald Taylor was born in Charlotte to Doris “Dot” Whitehurst and Conrad McDonald Taylor in 1956. The family moved to Raleigh eight years later, a city Sam never left.
It was his mother who volunteered Sam to help shelve books at the public library, but it was the elegance of the Dewey Decimal System that impressed the grade schooler: simplicity that allowed for organizational complexity. It was an early lesson in how to be successful that followed him through life.

His father somehow taught him effortlessly to maintain and repair a 1970 Ford Custom 500. This led to countless road trips and some tension when, with Sam’s encouragement, his best friend bought an identical car with much lower mileage but found it broke down constantly.

After graduating from Sanderson High School as an honor student, Sam crossed town to attend NC State. Despite his prowess as an auto mechanic, he found engineering might not be for him, choosing instead a degree in political science and an education as general manager of the campus radio station, WKNC. In 1976, Sam partnered with other campus radio stations across the state to deliver election coverage and documentaries, including an examination of how North Carolina’s congressional delegation worked – and didn’t work – together. That project set the stage for both a future career and his marriage.

Even before graduation from NCSU, Sam landed a job as a commercial radio reporter at top-rated WKIX 20-20 News, then started a freelance business covering the state legislature for radio stations in other parts of the state. He soon found he knew many people in state government and they knew him for his careful reporting and shrewd understanding of the story behind the story.
Subsequently when Jim Hunt’s gubernatorial campaign offered him a position, he enthusiastically accepted. After the campaign, Sam found himself a spokesperson for the NC Department of Commerce, helping recruit new industry to the state. Respected on both sides of the political aisle, he rose to director of public affairs for the department. When Republican Jim Martin was elected, the new governor asked Sam to stay on.

This was fortuitous when Sam decided a law degree might be a beneficial next-step career move, as he was able to apply to UNC’s law school with bipartisan recommendation letters from two governors. His application cited his decade of reporting on and working in state government, and the opportunities he had to better understand the “political and social temperament of our state as a whole – and a deep appreciation for the divergent opinions of our people.”

Accepted at UNC, he quickly found the intricacies of the law both entertaining and infuriating, but he also knew he had found a third career. He was an editor of the law review and was graced by the faculty with the Order of the Coif. When he graduated in 1992, he went to work for the law firm of Womble Carlyle Sandridge & Rice, applying his knowledge of the law, journalism, and state government as a lobbyist at the legislature.
Many of his clients were the high-tech firms drawn to the Triangle, whose business models were to be the life blood of so much of North Carolina’s future growth.

It was natural that in 1994, Sam played a key role in the startup of the North Carolina Biosciences Organization (NCBIO) to advocate for the life sciences industries in the state. He started as lobbyist, then general counsel, soon president and chief administrative officer of the organization. Under his leadership, NCBIO took a leading role in many of North Carolina’s major life science initiatives, including establishment of the state’s unique biopharmaceutical education and training program, NCBioImpact. He remained at NCBIO for the rest of his career.

Sam’s work for the life sciences was recognized by the Center for Entrepreneurial Development in 2005 with the Chair’s Service Award. He received the Life Science Conference Leadership Award in 2012 and the Life Science Award from the Triangle Business Journal in 2015.

This year, Gov. Roy Cooper recognized Sam’s lifetime service to the State of North Carolina by bestowing the state’s highest honor, The Order of the Long Leaf Pine.

“The [life sciences] industry has been and continues to be vital to the economic well-being of the state, and Sam has been critical to that,” wrote State Senator Mike Woodard to Governor Cooper in one of the nomination letters.

“It is hard to imagine anyone more passionate about life sciences in NC than Sam Taylor,” wrote Neal F. Fowler, the NCBIO board chair. “He has championed this charge over three decades, and done it in a collaborative, inclusive manner – in the spirit of great leaders throughout North Carolina’s history.”

Sam had known his future wife, Nancy Reed, from his college days, a collaborator from another university on that congressional documentary. Years later, in different stages of life, Sam and Nancy found themselves sharing love, a faith, and path forward together. They married in 1995 and settled in North Raleigh.
Sam and Nancy shared a passion for bluegrass music and rock-hounding, both in the NC mountains and in the far west. Their faith drew them to the Episcopal Church of the Nativity and then together to a four-year lay Education for Ministry program administered through the University of the South. For Sam and Nancy, the church outreach with Habitat for Humanity, Rise Against Hunger, and Back-Pack Buddies provided a community and a faith-based focus.

While the couple had no children, new church members became their honorary family, complete with honorary grandchildren who filled their house with laughter and muddy clothes after playing in the creek.

When Sam was diagnosed with pancreatic cancer in September 2020, he knew the future was uncertain, but his faith shone through. “God is a mystery, God can’t be understood; but God understands me.” Sam resolved.

A prerecorded memorial service will be available Sunday, March 14, starting at 2 p.m. EST at www.NativityOnline.org with the option to view on YouTube or FaceBook.

God Speed my friend it has been an hour and pleasure to have worked with you over the past 10 years. You will be missed. Tim Willis
- Tim Willis