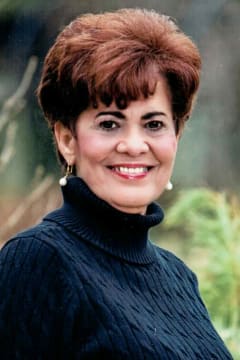 Ruth D'Lania Santana Vilorio went suddenly to be with the Lord on December 21rst, 2021 at Rex Heart and Vascular Hospital in Raleigh, NC. A faithful Christian for 86 years, she was born in Hato Mayor del Rey in the Dominican Republic. She was the daughter of the late Servando Santana and Providencia Santana Vilorio, both of Hato Mayor del Rey. She graduated from a private high school and worked for the Dominican government in Santo Domingo, the capital of the DR.

In 1963, her mother introduced her to her future husband, Wayne Spencer Pray of Boston, Massachusetts. Her mother was helping him with his work in the DR, building elementary schools as part of a U.S. Peace Corps project. Wayne was smitten at their introduction in 1963 and they married some two years later in August 1965 during a Revolution in her home country which forced them to wed at the home of her father. Ruth and Wayne immediately left the country and had a second wedding ceremony at his home in East Bridgewater, Massachusetts hosted by Wayne's late father, Winfred (Fred) Lester Pray, whom Ruth loved dearly. After an introduction to the entire Massachusetts family, they moved to Phoenix, Arizona in December 1965 and started their lives together. In 1966, their first child Tracy Irene Pray, was born on December 8th. Their second child Wayne Winser Pray was born one and a half years later and their final child, Nicole Ruth Pray was born in 1972 in High Point, NC where Wayne had taken a job with the local War on Poverty Program with the High Point Model City Commission. They raised their children in High Point where Ruth had many beloved friends and held many jobs related to her love of children, first in the public school system lunch program and later as lead teacher in the infant room at the Network Church Child Daycare Center.

Ruth was preceded in death by her parents and two brothers, William (and his daughter Kirsy) and her beloved Manen. We know they all welcomed her into Heaven. Here in the US, Ruth leaves her husband Wayne S. Pray, her daughter Tracy Pray Bradshaw and her husband Council, son Wayne Winser Pray and his wife Christy, and daughter Nicole Pray Kollman and her husband Mark. She left her most precious grandchildren who loved her like no other; Avery Winfred Kollman, Quinn Mathew Kollman, Caylei Teralee Pray, and Charissa Ruth Pray. She also left a large family in the Dominican Republic including her mentor and older sister, Nelly Santana Segura and her brothers that she adored, Servando and Rafael Santana; as well as many devoted nieces and nephews and cousins including Edis Vilorio, her cousin and best friend since childhood. Ruth had many lifelong dear friends, some of which she talked to on the phone almost daily including Caridad Planes of Fort Myers, Florida.

Ruth D'Lania was known for her quiet unyielding strength, grace, class, style, and her smile. She had an ageless beauty and those that knew her well never even knew her real age. She put family first and inspired her children always staying positive despite her health challenges over the last 8 years. She was a forever Servant to Jesus Christ and left all things in his control. We will have her Celebration of Life in both North Carolina and in the Dominican Republic in the Spring/Summer of 2022.

In lieu of flowers, the family asks that any donations go to a local charity of the donor's choice.