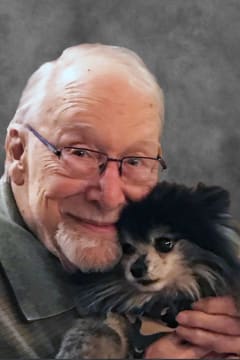 Known as Rudi to coworkers and friends, and as Opa to grandchildren and great grandchildren, he led an amazing life both personally and professionally. Rudi earned degrees in Power and Low Voltage Electrical Engineering from the Vienna University of Technology and began a successful career as a designer of complex electrical circuits and was a specialist in the field of uninterruptible power systems.

He met his wife, Friederike (Rikki), of 67 years in Vienna, and they enjoyed many adventures as their family grew and career opportunities took them across the Atlantic.

After working for Siemens in Vienna, he moved his family to Canada where he worked for Canadian Westinghouse, then to the U.S., where he was recruited by the Electric Products Company in Cleveland, Ohio, followed by Powerware in Raleigh, NC, where Rudi retired after 32 years as Engineering Director.

Rudi was a highly involved parent, supporting all his kids’ scholastic and sporting activities. He was an assistant Boy Scout leader earning the distinction of Order of the Arrow. He had many
interests including hiking, gymnastics, martial arts, and gardening, and he was a huge animal lover. Rudi and Rikki enjoyed traveling the globe and spending time with friends and family.

A Mass will be held at St. Luke the Evangelist Catholic Church for immediate family on May 4,
2021.

In lieu of flowers, memorial donations can be made in Rudi’s name to the Wake County SPCA , St. Luke the Evangelist Catholic Church , or the Springmoor Endowment Fund