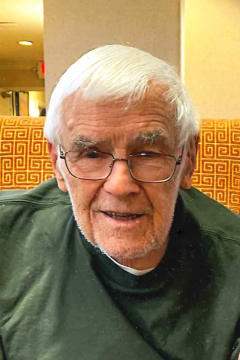 Rod was born in Scarsdale, NY, the third of seven children. He graduated from Scarsdale High School in 1945. After high school, Rod was drafted into the army and went to Japan with the Occupation Forces. Rod moved to Charlotte, North Carolina after the war to work with Piedmont Airlines which was a brand new company. He liked to say he did everything except fly the planes. During that time, he decided to enter the priesthood. He earned a degree in Philosophy from St. Bonaventure University in 1953, and then went to Italy and earned a degree in Theology from North American College (Rome) in 1957. While in seminary, Rod loved to travel, and spent time bicycling through Bavaria, and exploring Ireland, Spain, and Portugal with friends.

He then moved back to North Carolina and his ministry included directing Charlotte Catholic High School, and then Cardinal Gibbons High School. Rod served as superintendent of Catholic Orphanage Nazareth House from 1963- 1972. During this time, he earned his Master’s degree in Social Work from UNC- Chapel Hill. In 1974, Rod decided to leave the priesthood but remained an active member of the Catholic church.

Rod met his wife Sylvia in North Carolina, and throughout their 47 years of marriage, they traveled and enjoyed life with good friends and good food. His career as a social worker eventually led him back to the position of Director of the Raleigh office of Catholic Charities from which he retired in 2000. Rod was dedicated to social justice; he was a founding member of Amnesty International Group 213 (Raleigh), and traveled several times with Witness for Peace and Habitat for Humanity. He volunteered countless hours to Catholic Parish Outreach. After his retirement, Rod served as a Guardian ad Litem for children involved in the judicial system. He participated in Moral Mondays, and was arrested for his peaceful protest. Rod was very supportive of his daughter’s dance education, and performed as a guest several times with the Raleigh Civic Ballet Company.

Rod is survived by Sylvia, their daughter Renee, and three grandchildren, and Rod’s older brother Kevney and older sister Peggy. He was adored by many nieces and nephews, and extended family and friends.

The family asks in lieu of flowers, donations be made to: