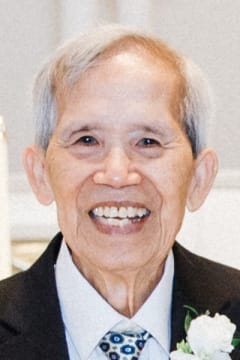 Obituary For Roberto Sao Tac Do

Mr. Sao Tac Do of Raleigh, NC passed peacefully in his home on December 15, 2020 surrounded by his beloved family. Mr. Do was born in Vietnam on June 1, 1924 and was a devoted catholic. As a husband, father, grandfather, and great-grandfather he greatly enjoyed spending time with his children and seeing all of his family at gatherings. He was very proud of his grandchildren and never short of praise for them.

Born in Ha Dong province in North Vietnam, Mr. Do lived a full life. He witnessed and participated in many significant events that shaped Vietnam's political turmoil in the 20th century. This included the nationalist uprisings against French colonial rule that led to the Geneva Accord of 1954, where Vietnam was divided into two countries, and the Fall of Saigon in 1975. Nine years after the Fall of Saigon, in 1984 Mr. Do, his wife, and their five children immigrated to the United States, settling first in Miami, Florida and later in Raleigh, North Carolina.

As a US citizen, Mr. Do followed politics with a passion. He was an active leader in social, cultural, and civic activities at local churches. He was a strong supporter of cultural events celebrating Vietnamese Heritage, and assisted many Vietnamese families as they settled in the United States. Mr. Do is survived by his loving and devoted wife of 62 years, Xuyen Thi Dao, and his children. He also has loving extended family in the United States and Vietnam. He lived a full, happy life and is forever loved and cherished by family and friends.

Cremation will follow immediately after mass at Renaissance Funeral Home and Crematory.