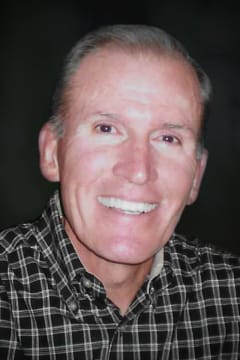 Growing up as a military "brat", Sandy lived all over the US and abroad until his family settled in Northern VA. He was a gifted athlete. Whether playing in little league championships, competing in golf, tennis, handball or racquetball tournaments or playing his daughter in HORSE in the driveway, he usually found himself on the winning team. He graduated from Thomas Jefferson High School in Alexandria, VA, and attended Hope College in Holland, MI, where he was a member of the OKE Fraternal Society and served as co-captain of the baseball team. Hope College is also where he met Kathy, who became his beloved wife.

After graduating from Hope, he entered the Navy, served on the USS Independence aircraft carrier and had the opportunity to commandeer former President Kennedy’s PT boat. Lieutenant Kidd served our country for 5 years. After the Navy, Sandy worked in sales and marketing for a variety of corporations, including Johnson & Johnson and PepsiCo, eventually joining Kathy in real estate at Berkshire Hathaway Home Services York Simpson Underwood.

Sandy was a member of Saint Andrews Presbyterian Church for 36 years, attending faithfully with Kathy, whom he adored and considered his best friend. On June 25th, Kathy and Sandy celebrated their 51st wedding anniversary. They loved to spend time in Europe, especially in France, where Kathy had the opportunity to maintain her French, while Sandy just practiced his one phrase, “L’addition s’il vous plaît” – “The bill please”. While they loved exploring abroad, the place to which they always returned was Bear Island on Lake Winnipesaukee, NH. The lake was a refuge for them, a place to relax, recharge and spend quality time with their daughter, Kristen, and Sandy’s beloved aunt, uncle and cousins.

Sandy adored his family and was an excellent father – strong, kind and fun. He and Kristen joined Y Guides in 1988, where he became known as “Stoneface” to their tribe. To this day, that group – five dads and five daughters - gather at the beach for a weekend every fall. He valued spending time with Kristen and these friends at this annual gathering...Now and Forevermore. Sandy had another nickname, Dino, given to him by his grandkids, Addie and Isaac. He loved and joyfully spent time with them weekly...swimming, playing, reading and laughing.

A Visitation will be held Thursday, September 8th from 5:00 – 7:00 p.m. at Saint Andrews Presbyterian Church, 7506 Falls of Neuse Road, Raleigh, NC 27615. The Memorial Service will be Friday, September 9th at 11:00 a.m., also at Saint Andrews Presbyterian Church.
Flowers are welcomed, but donations may be made to the Michael J. Fox Foundation for Parkinson’s Research. He was dearly loved and is already deeply missed.