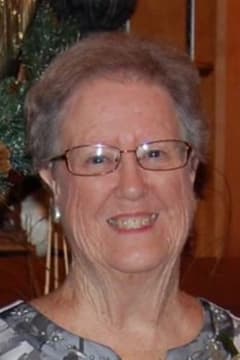 Pat grew up in Meadville, PA, and graduated from Villa Maria College in Erie, PA. She was a teacher in California, which is where she and Ben first met and later married. After brief stays in Huntsville, AL, and Boulder, CO, Pat and Ben settled with their daughters in Apalachin, NY. They lived there for 27 years until retiring to Raleigh, NC, in 2001.

During her later years, Pat enjoyed traveling with Ben and attending all their grandchildren’s activities. She and Ben also had fond memories of traveling with their dear friends from the Silver Lining group. She enjoyed following the Carolina Hurricanes as well.

In addition to her husband and parents, Pat was preceded in death by her brothers, John Burgess and Thomas Burgess.

A private funeral Mass will be held at St. Luke the Evangelist Church in Raleigh.

MaryAnn, Kathy, Jeannie and families. I am so very saddened to read this. Like my parents, yours passed very close together. I so loved the time I got to spend with your mom and dad, they were simply wonderful caring people. Please know my thoughts and prayers are with you, and them. I know there are wonderful memories to help you at this difficult time. Blessed to have known them❤️ Martha Lyons
- Martha lyons

I am so sorry for your family's loss. Your family is in my prayers and thoughts.
- Desirea Hazlett