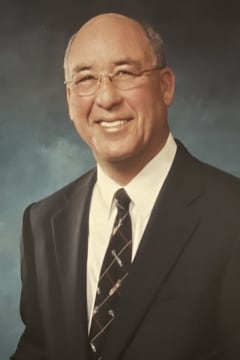 Chip moved to Raleigh as a young child and graduated from Broughton High School. He followed in his father’s footsteps by joining the US Marine Corps in 1972. Chip graduated 1st in his class in NCO school, earning a promotion to sergeant. While stationed in Okinawa, Japan, he led a scuba diving training program for the USMC. These were fond memories that Chip spoke about frequently.

After graduating from Florida Atlantic University, Chip married his former spouse, Shelia Craft, in 1976 and raised two children, Shana and Brad. He had a strong entrepreneurial spirit and founded a successful business specializing in recognition and awards called CS Recognition Solutions.

Chip provided a great life for his family. He was a good balance of tough disciplinarian and fun adventurer. Not many knew that the tough Marine was also an animal lover, known to tame squirrels, rescue owls, and lead “African safaris” at the beach with his family.

The beach was his happy place, and many remember the good times he shared with his family and friends in Wilmington, NC. Chip loved a party and was always in for trips to the Kentucky Derby or pit passes at Nascar races. He also loved football. The windows would rattle with his booming voice as he cheered for NC State on Saturdays and the Washington Redskins on Sundays. However, nothing made Chip root louder than watching his son on the field during high school football or when his daughter competed during her early years in swimming.

Chip recently told his children, “I’ve lived a good life. I’ve seen some pretty cool things in my day.” He would tell them stories about squaring off with the Haitian military in the streets of Port-au-Prince, outside of “Baby Doc” Duvalier’s mansion in the 1970s.

He shared his shock when he came nose to nose with a white-tip shark while diving in the coral reefs in Okinawa. He told stories about leading a team across the Panama Canal during jungle survival school. Some of the best stories were straight from the streets of Raleigh, NC, during the 1960s. There was something about the way Chip told a story that made you feel like you were right there too.

Chip is survived by his daughter, Shana (Brandon) Penny, and son, Brad Separk, as well as his beloved grandchildren, Saylor and Hadley Penny, all of Raleigh, NC. He is also survived by his brother-in-law, Richard Vaughn of Mt. Airy, NC.

Chip was preceded in death by his aforementioned parents, as well as his sister, Betty Kay Separk Vaughn.

A Visitation will be held from 2 pm - 3 pm on Friday, November 4th, at the Renaissance Funeral Home on Six Forks Road. Military Honors will be presented at the end of the visitation.