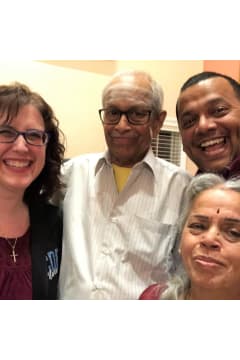 Nerur Narayanan Srinivasan, 81, of Morrisville, NC died peacefully in his home on July 23, 2020. He is survived by Kalyani Srinivasan, his wife of 49 years and his son, Anand Srinivasan.

Often called Seenu by his family, Srinivasan was the son of the late N.S. Narayanan and the late N. Subbalakshmi He was the fourth of 12 children of whom 8 are still with us, including brothers Balasubramanian, Chandrasekaran, Sampath Kumar, Ganesh and sisters Valli, Dhanalakshmi, Shanti, and Saroja.

Born and raised in India to a father who was an inspector for the railroads and a mother who was a homemaker, Seenu graduated from Osmania University with a degree in Veterinary Medicine. He moved to Chennai where he met his future wife, Kalyani Krishnaswamy. They married in 1971 and lived all over the world. Their son, Anand, was born in 1974. The family moved to Zambia, in southern Africa, in 1975 where he worked as a veterinarian for the national government. Kalyani emigrated to the United States in 1983. Seenu and Anand followed in 1985. The family has lived in North Carolina since 1986.

During his 81 years of life, Srinivasan was a beloved son, husband, father, father-in-law, uncle, and friend to many people. His easygoing manner and dry sense of humor was a blessing to everyone in his life. A devout Hindu, he prayed daily and until his final years attended services at the temples in the triangle area. He loved visiting family and friends in other states and in India. He lived a long life and left behind a legacy of love fond memories amongst those of us who loved and cherished him and were loved by him.

A memorial service will be held at 2:00 PM on Sunday, July 26, 2020, at Renaissance Funeral Home, 7615 Six Forks Road, Raleigh, NC 27615. Family and friends are welcome to the viewing form 2:00 to 2:45 PM. A private funeral ceremony will follow immediately, along with a cremation, according to Hindu custom

The bonding that I had with Perepa for the past 1 year was very special and memorable. I thought Perepa was a quite person and doesnt talk much, but I had a chance to see a different Perepa. I and Perepa have had lot of conversations, I am sure, the things he shared with me during those conversations, he would not have shared it with anybody else. I liked the fact that he used to like go walking only with me. He used to listen to whatever I say, like my father would have listened to me. I am feeling blessed that just a month ago Perepa stayed with me at my home, we have had lunch and dinner together most of the days, which I have missed doing it with my appa. I used to feel that I could not do anything for my appa, but all that I missed doing for my appa, I got those fulfilled doing it for Perepa. I was holding up strong but when we dressed him for the last time, I broke down completely when it hit me that I am losing my father once again and not going see him anymore. I am sure he is at better place right now. But I will miss Perepas that smiling face, the walk, the conversations and the love & affection that I felt even though he doesnt say or show. I will miss you a lot Perepa. Thank you Perepa for giving me a memorable 1 year, which I will cherish for my life.
- Kavitha
He was one of my loving brother.
- shanta narayanan
Sweet and joyful person. Very calm and quiet... Loved his family and sisters a lot
- Dhanam
He was fond of drinking coffee. Never said 'No' to Coffee. Loves to watch Cricket.
- Shivkumar Sethuraman