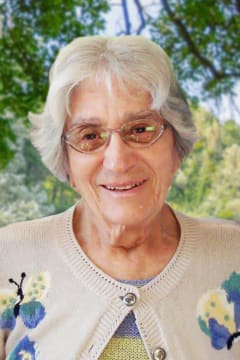 Matea was born in Rye, New York to Carlo and Maria (Ricci) San Giovanni on June 19th, 1924. She grew up pumping gas at her family’s neighborhood gas station. Matea graduated from Rye High as a member of the National Honors Society. She then attended secretarial school before working for a family doctor and living at home to fulfill family duties and help with her younger siblings and nephew. She found unique joy in spoiling her youngest brother, John Paul, whether it be buying him a tricycle or taking him to the library on a Saturday morning for storytime. One afternoon, a fateful conversation and some light-hearted teasing landed her a date with her next door neighbor, Louis Baffaro. Soon Matea found herself marrying “the boy next door” on the day before her 24th birthday.

Matea and Lou were married for 57 years before Lou’s passing in 2006. They were an IBM family and moved to Raleigh in 1967 from Poughkeepsie, NY. They enjoyed traveling and brought their daughter Josette on many trips. Their travels took them across the United States, including to Hawaii and Alaska, and across Europe, even spending a short time living in Paris before Josette was born. Once in Raleigh, Matea worked for the Raleigh Fire Department at Station One under Chief Keith’s leadership. Over the years, she opened her home to many family members visiting North Carolina, traveling up or down the coast, or to those who needed a place to live for a short period of time. She often hosted exchange students from N.C. State University and visiting international IBM employees for dinner.

Matea was a faithful member of St. Raphael’s Catholic Church where she participated in Altar Guild and served as a member of the Health Care and Prayer Shawl Ministries. Matea was a founding member of the Triangle Italian American Women’s Club (TRIAWC) and served as state treasurer in the NC 8th Air Force Historical Society. Matea enjoyed playing bridge with her husband and friends and loved watching college basketball. She followed both the ACC and NCAA tournaments closely each March. She was an active room parent in Josette’s classrooms and led her Girl Scout Troop. Later in life, she assisted Josette with her granddaughter’s Troops as well.

Matea was a proud mother, grandmother, and great-grandmother. Family was incredibly important to her and she showed that in how she spent her time. She knit unique Christmas stockings for Josette, Rick, their children, and her great grandchildren. Matea took great joy in teaching her grandchildren family traditions and recipes. She spent many hours making Christmas cookies, ravioli, and other dishes with them. She enjoyed card games but was also fond of quiet moments when she could read a book or work on a puzzle. As Matea grew older, she was often heard saying, “For an old lady, I’m doing okay,” and in truth, she did far better than okay. She will be dearly missed by her family, near and far.
Matea is survived by her daughter, Josette Baffaro Beller; her grandchildren: Kristin, David (Amanda), Lauren Binanay (Dave), Joseph, Christopher, and Anna Matea; her great-grandchildren Chloe Binanay and Charlie Beller; and her brother, John Paul San Giovanni (Marie), of Bonita Springs, Florida. In addition to her husband, Louis, Matea was predeceased by her sister, Marie Castellano (Anthony); brothers, Carlo and Francis San Giovanni; and her son-in-law, Rick Beller.

The family will hold a visitation on Wednesday, April 28th, 2021 from 6-9 pm at Renaissance Funeral Home. A Mass of Christian Burial will be held at (and live streamed) by St. Raphael’s Catholic Church in Raleigh, NC on Thursday, April 29th, 2021 at 1 pm. Interment to follow at Raleigh Memorial Park. The family would like to thank Aware Senior Care and Transitions LifeCare for the compassionate attention shown to Matea and her family. In lieu of flowers, donations can be made to Transitions LifeCare (Raleigh), Catholic Charities of the Diocese of Raleigh, or a charity of your choice.

What a wonderful legacy Matea is leaving her family! It made me want to be Italian and pull up a chair at her table . She and the family brought so much laughter, excitement, sharing of fun crafting, and a sense of community and friendship to Abbotswood. She truly made Abbotswood her home! Many thanks to Josette for her loving support of her mom while she was at Abbotswood. What a blessing you were to her.
- Connie R. Miller

Josette and family, Aunt Tia, as I knew her, was always one of my very favorite persons. I spent a lot of time with her and Uncle Lou when I was little as they cared for me - sometimes for a couple of weeks at a time - when my father was seriously ill. They were a godsend for my parents and gave me many wonderful memories. I am so sorry for your loss.
- Terry Polino

Josette I pray for your peace during this sad time. Your mother Matea's smile is something I won't forget. She always had a kind word and told the most interesting life stories. She will be missed.
- Mary

My condolences to you and your family. My mother (Rosalie Mennillo) and Matea were 1st cousins. Our family visited Rye, NY frequently and everyone would tell Matea and I we looked alike. I remember our visit to upstate New York where see would receive us with open arms. Blessings to your family and I will keep you in my prayers during this difficult time.
- Rosemarie (Mennillo) Della Rocca
We are saddened to hear about the passing of Matea. She was a wonderful lady and was always willing to help in anyway. She lived a long life and taught so many so much about the Italian ways. Love, Fran and Bob Giannuzzi
- Fran and Bob Giannuzzi

Josette, I am so sorry. I can't imagine what you are going through losing your Mother after just losing your husband. My thoughts are prayers are with you and your family. Hugs! Love, Mickey and Bob Hale
- Mickey Hale