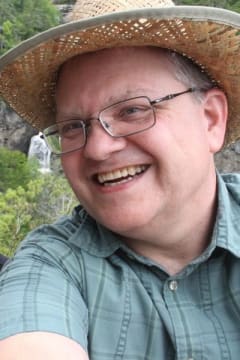 Lawrence “Larry” Volker passed away early Sunday morning, October 11, 2020, after a long, hard struggle with COVID-19. An avid photographer, traveler, cook and baker, part-time astronomer, described by his family as “HiLARRYous!”, patient, and handsome, Larry was kind to all he met. Larry’s coworkers said that Larry was always able to pull the stress out of the job with his humor and will be irreplaceable. Larry relished the time he had to spend with his grandchildren. Saturday morning pancake breakfasts and a fun filled weekend adventure were commonplace and looked forward to by his children and grandchildren.

Born in Kansas City, KS February 3, 1958 to Helen and Glenn Volker, Larry was the eldest of 6 siblings. Larry was a proud graduate of Bishop Miege High School and University of Kansas earning a Bachelors Degree in Computer Science. Larry worked for AT&T for over 20-years and was well-respected in the telecom industry.

A private celebration of his life will be held on Friday October 16th at 11:00AM(EST), at the Renaissance Funeral Home, 7615 Six Forks Rd, Raleigh, NC. For those not attending in person, we will be streaming on Facebook. Click here to watch at this the scheduled time.

Larry never met a child that didn’t instantly love him. For many years Larry has supported the children at the Methodist Home for Children.

In lieu of flowers, donations can be sent in honor of Larry Volker to:
Methodist Home for Children
1041 Washington St
Raleigh, NC 27605-1259

Dear Volker Family & Friends, my deepest condolences on your loss. I worked with Larry for 15 years at AT&T and it was my privilege to do so. He was a one of the most patient, kind and dependable team members at AT&T. Larry could always be counted on to get the job done and add a little humor while doing the work. I have missed - and will continue to miss - hearing his voice and stories on our daily morning calls. Larry was very special to our extended AT&T Family. Thank you for sharing him with us. God Bless Larry and his family, always. Rest in Peace, Larry.
- Andrew Noreen
Larry was always so kind and considerate of others. I know he loved his family deeply. I am praying for God's comfort and peace to be experienced in abundance by Judy and the kids and grandkids. You are dearly loved!
- Cindi Whiteside
Larry was one of a kind. A wealth of information on every subject imaginable, some useful, some not so much .... but mostly useful. He could go on about black holes in the universe, black bean casserole in the oven or Bugs bunny episodes from his childhood, all in the same conversation. But mostly Larry talked about his family, his friends and those he came in contact with each day. He cared deeply for them all. Larry could get sarcastic or cynical when presented with idiocy, which was sometimes fairly often, but he always took whatever the situation was and did good. He always made things better. Larry did much more good unto others than he would ever have them do unto him. He helped Everybody. Working with Larry for the last 15 years has been a blessing, and he leaves a giant void which will not be filled easily, if at all. God, please bless Judy, the Volker children and the grandchildren. Larry will be sadly missed.
- John Dosch
Dear Volker family, I'm so sorry to hear about Larry. I went all through school with him at St. Pius, Bishop Miege, and KU. Larry and I kept in touch, and I would see him at our Bishop Miege class reunions. He was a great guy and he will be missed. I'll keep the Volker family in my thoughts and prayers. John Wilkus
- John Wilkus
I sure everyone that knew or met Larry would agree that he was a kind man. He was also a patient man that loves his family with all his heart. He was a good man and also loved his country. Another one gone too soon. Prayers for Judy, the kids, and all the family. May God give you peace and comfort knowing he is with Jesus. Prayers
- Danny Mejia
Dear Volker Family, I work for AT&T and worked with Larry for the past 15 years. I never met Larry in person, but we spent a lot of time on phone calls and chat windows. I knew he was a special person, well respected and giving. We really connected when we started sharing trivia on old cartoons that we watched as kids and Larry would send me all kinds of trivia tid-bits. Larry was always the first to step up and I'm so happy to have known him! My condolences for your loss.
- Mike Bushell