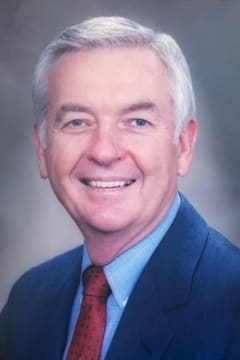 On the afternoon of November 2, 2021, John Sherman Gastineau, age 86 of Raleigh, NC entered into eternal life. Although undergoing cancer treatment at Duke Hospital - Raleigh, his death was unexpected; his wife, Kathy and stepdaughter, Stephanie were by his side. While all who so dearly loved him grieve our loss, we celebrate his life and rejoice in the knowledge he now lives with his Lord and Savior.

Born on a farm in Switz City, IN on July 28, 1935, to parents Lydia and William Gastineau. John determined early on that farm life was not for him; he enrolled at Indiana State University in 1953. After two years he enlisted in the US Navy and proudly served his country as a Yeoman aboard ship sailing with the Pacific Fleet in the Far East. Upon discharge, he returned to ISU and graduated from the Scott College of Business in 1958.

Following graduation and after a brief tenure as a school teacher, John joined the Travelers Insurance Company in South Bend, IN and began a lifelong insurance career. He would subsequently relocate to Charlotte, NC and then on to Chapel Hill, NC where he was Founder and President of the Chapel Hill Insurance Agency. He later became a partner in Providence Insurance Agency and its affiliates in Raleigh, NC ultimately retiring from Relation Insurance, Raleigh, NC in 2018.

John loved life and all that came with it. A devoted husband, father, friend; he doted on his grandchildren. He was quick to laugh, dance with joy, ever eager to help a neighbor. Walks on the beach with precious Amy, his beautiful corgi, were especially enjoyed for it presented them with opportunity to enthusiastically greet and visit with a stranger.

Always a sports fan, he never lost his Indiana roots loyalty following the ISU Sycamores and IU Hoosiers. However, it was his adopted Tarheels that sustained his passion for basketball and provided the occasion to give a gentle needle (accompanied by a wry smile) to his Wolfpack friends. A long suffering Cubs believer (“wait until next year”), John was forever the optimist, infrequently rewarded, savoring every win. Zealous for golf, he would look forward to playing every day he could with his golf buddies at Wildwood Green, yet invariably at the 19th hole, frustrated, empathetically declare he would never play the game again. It was not a promise.

John had a profound affection for people and a strong desire to serve, actively involved in professional, community and service organizations and often was recognized for his contributions. As a member of the Independent Insurance Agents Association of NC, he was Chairman of the Agent's Insurance Advisory Board for the State of NC in excess of 30 years! For his dedication and leadership, he was the recipient of the Agent of the Year Award for the State of NC.

Engaged in his community, John was Chamber of Commerce President, Chapel Hill, NC; member of the Board of Directors, Village Bank, Chapel Hill, NC and Board of Directors, Wildwood Green Homeowners Association, Raleigh, NC. He valued highly the relationships developed over the years with those in the Raleigh Sports Club, Men’s Group at Wildwood Green, Rooster’s of Chapel Hill and notably the Men’s Bible Study Group at Grace Raleigh.

Service organizations provided John the opportunity to address the needs of others. As a member of the Kiwanis Club of Chapel Hill, NC, he served as Lt. Governor for the Carolina District. Active in the Kiwanis Club of Raleigh, he was formerly Risk Manager for the Carolina District and Chair of Charter Night; in recognition for his dedication to service he received the Dillon, Hixson, Hyatt and Zeller Awards. Also, John had a deep abiding commitment to the Shrine Club of Wake County and for many years served as Treasurer.

Our family would like to thank those who cared for John during the past months of treatment (including Matthew, his “right-hand man”, who lovingly dressed his surgical wounds daily and drove him to all of his doctor’s appointments and John’s closest friend, Don Fowler, who was available for whatever the need may be) and our friends at Grace Raleigh who offered up prayers and on our behalf.