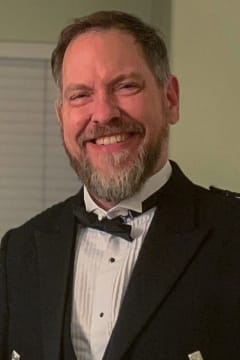 Jeff Freeman, 53, passed away suddenly on Monday, September 12, 2022. He was the son of John Frink Freeman, Jr. and the late Mary Catherine Hales Freeman, formerly of Bladenboro, NC.

Jeff was born on August 2, 1969, in Raleigh, North Carolina, where he graduated from Sanderson High School. An avid fan of classical music, Jeff practiced for endless hours mastering the trombone and attended the prestigious Curtis Institute of Music, earning a Bachelor of Music. Music was not his only love; science held a special place in his heart, and he later earned a Bachelor of Science in Physics from North Carolina State University. Jeff’s seemingly disparate interests in music and science are typical of Jeff’s intelligence and passions. His interest in all subjects was endless, and this quality allowed him to connect with everybody.

Jeff’s early years were strongly influenced by his heritage, by growing up in the environment of Tabernacle Baptist Church, and by his unique music-related experiences. Jeff’s parents were strongly supportive of Jeff’s and his brother, Alex’s, shared interest in music, allowing them to pursue their dreams through adulthood. As brothers, Jeff and Alex were not only close, they were the best of friends. They shared similar humor and mannerisms, in spite of being separated by continents, and they were in constant communication about their favorite songs, the news, flashes of memory from their childhood, their kids, and words of encouragement for each other. Jeff was fortunate to find numerous friends along the way. He did not take his friendships for granted, making a point of trying to catch up with people, stay in touch, sit awhile and talk.

Jeff’s love of science and music led him to roles at NASA and eventually to Dolby Laboratories, where he excelled in the world of audio engineering for the past 22 years, most recently as Director of Applications Engineering and Testing. It was also at Dolby where he met his wife, Wendy, and over several years, they worked side by side on countless tradeshows, often taking them to various cities across the country. They were able to experience countless fabulous meals and shows, making stays of 7-days+ a joy. Wendy and Jeff were also able to travel to other destinations, including multiple trips to Maui, Oahu, Oregon, Washington, Finland and Sweden.

Jeff’s brilliant supernova personality left a lasting impression on everyone he met, making them feel like they were the only person in the room when he talked to them. He poured his heart and soul into his work and received endless admiration from his fellow colleagues. Through music, his work at Dolby and other experiences, he had the fortune of traveling and working all over the world, including China, Taiwan, Japan, Korea, India, Europe, South America and Australia. Along the way, he garnered the affection of everyone he met. It is without a doubt that he has fans on every continent and will be remembered fondly forever.

Jeff’s two children, Ella and Isaac, meant the world to him. His intelligence, humor, desire to try new things, and a good dose of goofiness made Jeff a wonderful and lovable father. When the children were born, he made them superhero babies, flying them around in the palm of his hand. As they grew, he would swing the kids up high over his head, and they loved every minute of it, totally fearless. In more recent years, he went on countless walks with the children through the woods, searched for snakes with Isaac, dirtied every pot in the kitchen cooking with Ella, and spent countless hours talking with the children as equals, not just as their dad. There is comfort in knowing that Jeff will live on in both of his children, who are so much like him.

Anybody who knew Jeff has a “Jeff story” that is always funny and heartwarming. One story shared recently by a friend was when he, Ella and a few friends were waiting in a long line for the Hello Kitty truck to purchase a few items for Wendy. Jeff suggested buying dozens of doughnuts to hand out to people standing in line. When somebody in line asked him why he did it, he said “I like making people happy.” Jeff touched all of us who knew him, and we would love for anybody to share special stories about Jeff on the Renaissance Funeral Home website.

The celebration of life service will be held on Friday, September 23, 2022, at 10:00 AM (ET) at Tabernacle Baptist Church, 8304 Leesville Road, Raleigh, NC 27613. Friends and family are welcome to attend. For those who are unable to attend the memorial service, it will be live-streamed starting at 9:45 AM (ET) on September 23. The live stream link is: Tabernacle Baptist Church Livestream

The celebration of life service will be followed by a graveside service at Pine Crest Cemetery in Bladenboro, North Carolina, at 3:00 PM. Jeff will be buried next to his mother, Catherine, with whom he shared the same sense of humor and from whom he learned so much.

Flowers are welcome, and for those wishing to make a memorial donation, donations are appreciated at: