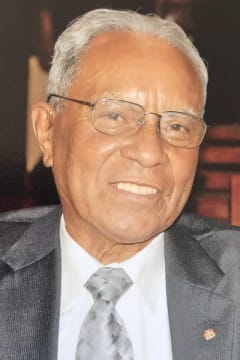 Jesse Bruce Duncan, the patriarch of his family, went to be with the Lord on Saturday, September 12, 2020.

Bruce, as he was called, was born to Jesse and Frances Duncan on October 7, 1929 in Hillburn, NY where he resided until relocating to Raleigh, NC in 2007.

He was a loving husband, father, grandfather, great-grandfather, brother, uncle, and friend. Bruce was a member of Lighthouse Assembly, Brook Presbyterian Church, The Lord’s Church, and Lifehouse Church.

Bruce was preceded in death by his beloved wife, Pansy, and parents, Jesse and Frances Duncan.

He is survived by daughters, Michelle Russo and her husband, Bill of Raleigh, NC and Linda McMillan and her husband, Melvin of Raleigh, NC; six grandchildren: Candice, Cherin, Brian, Courtney, Warren Jr., and Briana; twelve great-grandchildren: Jason Jr, Marcus Jr, Eric, Brooke, Elissa, Cornelius, Jace, Walter, Joshua, Naomi, Margaret, and Jovi; and a host of nieces and nephews. In addition to his wife and parents, he is preceded in death by his siblings: John Sr., Irene, and Randolph.

Bruce was a veteran of World War II and the Korean War. He was a commander of VFW Post 2973 in Suffern, NY and was named the State Commander of the year. In 1999, Bruce was honored to receive the Buffalo Soldier Award, an award given to distinguished African American soldiers.

On September 16, 2020, a Visitation from 1:00- 3:00 p.m. and Funeral Service beginning at 3:00 p.m. will be held at Renaissance Funeral Home. **ALL guests must wear a mask upon entering the funeral home and throughout the visitation and service**

In lieu of flowers, memorial donations in honor of Jesse Bruce Duncan maybe made to VFW Youth Scholarship program (www.vfw.org/ways-to-help).

Arrangements under the direction of Renaissance Funeral Home in Raleigh, NC and Scarr Funeral Home in Suffern, NY. Online condolences may be sent to the family at www.rfhr.com.

Linda and family, I am so sorry to hear of your dad's passing. I will always remember that big smile of his when I greeted him. In church You are in my prayers. God Bless you and the family.
- Barbara A Brooks
Uncle Bruce I love you and miss you so much already. You have one of those smiles that always lit up the room. Every time I see you your happy and full of energy and evey time I think about you I remember all of the good times. I Love you all and sorry I couldn't make it.
- Ohagi Cole
Linda, Michelle and family, so sorry for the loss of your Dad. He will be missed, I'm so glad we got to spend time with him at his birthday celebration. When he was up here visiting he sat and talked about history in Hillburn he kept everyone attention. Thank you for sharing your Dad with us. I will miss that handsome smile and wonderful burst of laughter. God Bless, he is now with the love of his life your Mom Love you all, Bonni
- Bonni OBlenis
Bruce you will be missed I always enjoyed going to see when my father would come back to hilburn to preach. You set the example for me thank you for sharing all the family history. Rest well, prayers
- Woody Caldwell