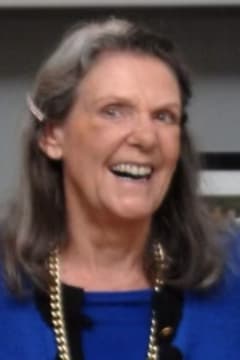 Irene Krabill had a magnetic energy that brought joy and fun to everyone around her. She loved to dance and greeted everyone with a warm smile and friendly conversation. Even the pets would follow her around and not leave her side.

Irene was born in Liverpool, England in 1935. During the Second World War, she was evacuated to Wales and spent years living with host families and learning Welsh. Near the end of the war, she returned to her family in Liverpool, finished school and went on to work as a model and dancer.

She met her husband, Carl Krabill, when he served at a US Air Force base near Liverpool. They married and she followed him back to Ohio where they raised their family. Although she lived in the US, she returned to Liverpool often and kept her British accent.

Irene was always the cheerleader for her family. She supported her husband Carl as he retired early from teaching and began a career as an artist. With her support, he achieved success as an artist and won multiple awards for his work. She was his behind-the-scenes art critic, organizer, painting delivery person, marketer, and supporter.

Irene always told her children and grandchildren that they could do anything they set their mind to. She dedicated her life to supporting her children and grandchildren in all their adventures and challenges. And Irene was the favorite babysitter for the grandkids. When she arrived, adventure was not far behind. This might include having her be the goalie in games of roller hockey.

Irene Krabill, 87, died August 27, 2022, surrounded by family and pets. She lived a loving and vibrant life as a wife, mom, grandmother (aka Nana), model, teacher, and animal lover.

She leaves behind her children Keith, Vanessa and Kerry (Bob) and her sister Carol (Tony) O’Leary and brother Roy (Sheila) Shaefer. She will be missed by six grandsons Ian, Devon, Trevor, Reece, Jaden and Jeremy along with family in the US and England.

A celebration of life will be held this fall in Liverpool, England. In lieu of flowers, donations can be made in memory of Irene Krabill to the Animal Protective Society of Durham.