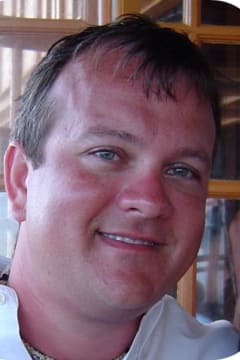 Greg was born in Florence, Alabama, to Harold and Peggy Hammond on August 26, 1967, but resided in Prattville, Alabama for most of his childhood until departing for college at the University of Alabama in 1985 (Roll Tide!). In 1989, Greg graduated with a B.S. in finance and, during his time in Tuscaloosa, met and fell in love with Alena. Greg and Alena were married on June 2, 1990, in Alena’s hometown of Dothan, Alabama. In 1994, Greg welcomed his first daughter, Elizabeth, into the world in Birmingham, Alabama on February 28, 1994. Abby followed on March 19, 1997, also born in Birmingham, Alabama, and after moving to Austin, Texas in 1997, Greg and Alena were both thrilled and surprised to discover they would become parents to a third daughter, Katherine, who was born on April 15, 1999. Greg and his family then moved to Woodstock, Georgia, in 2000. Seven short years later they packed up and settled in Raleigh, North Carolina, where Greg lived until he was invited home to be with Jesus.

Greg was a fierce Alabama football fan his entire life and passed his passion for the sport and program on to his three children, whose favorite Saturday activity in the fall is getting decked out in Bama gear and cheering on the Tide. Aside from football, Greg also loved taking his three girls to baseball games, notably the Atlanta Braves and Durham Bulls. Dozing off during the PGA Masters Tournament was an annual event for Greg as well.

Aside from sports, Greg was an avid gardener for many years, and always treated his family to numerous homegrown treats. He also had a passion for cooking and even considered pursuing a career as a chef when he was younger, but ultimately chose a career in finance to spend more time with his future family. His love of cooking and food followed him his whole life, however, and he spoiled his family with incredible meals, and even planned vacations with food being one of the focal points of the trip, much to his girls’ approval.

Greg’s life was marked by giving generously of his time to his community. Whether he was volunteering for Meals on Wheels or beginning work before dawn on a Saturday to help facilitate moving props and equipment for the Panther Creek High School Marching Band competitions, Greg volunteered with fervor and demonstrated compassion towards those in need.

Just like his own, Greg was a godly father and raised his children in the disciplines of the Christian faith. Greg left his children a legacy of hope in the redeeming grace of God. God’s love and forgiveness shaped Greg’s life as a loving son, husband, father, nephew, uncle, and friend. The promise of the gospel secures Greg’s hope of eternal life and sustains those who share his hope.

In lieu of flowers, family and friends may consider a donation to the Durham, North Carolina chapter of Meals on Wheels (Durham) by clicking on the link. Donations can also be made by phone at 919-667-9424.