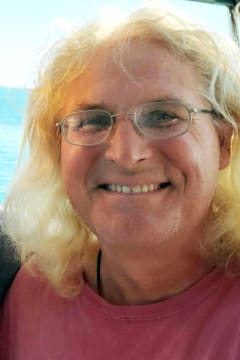 Gregory Alan Jerrell passed away on March 1, 2021 off the beautiful, turquoise waters of the Bahamas while pursuing his dream of sailing around the world with his wife and co-captain, Mary, aboard their sailboat, Remedy.

Greg possessed a zeal for life that overflowed into the lives of all who knew him. His heart was wide and deep. He loved and nurtured his children, who were his single greatest life adventure. He taught them the meaning of love and how to navigate life’s challenges. He loved playing with his grandchildren. The joyful laughter that filled his life was too plentiful to forget.

Born in Gainesville, FL on April 14, 1961, to his beloved parents Carl “Sonny” and Jean Jerrell, Greg would find his adventurous spirit early in life as he enjoyed all the many different places his family lived as a result of his own father's military career.

Greg moved from the Philippines to spend his first two years of high school in Alaska before his family transferred to San Antonio, Texas. He met Mary their junior year at South San Antonio High School West Campus. After graduating, he attended the University of Texas, San Antonio where he earned a BS in Geology on an ROTC scholarship, going on to earn his Master’s in Systems Management from USC. Greg was commissioned as an officer in the US Air Force, beginning a 25 years military career which included assignments at Mather AFB, Plattsburgh AFB, Castle AFB, Little Rock AFB, Howard AFB-Panama, Fort Leavenworth, Fort Bragg, Naval Station Norfolk, and the Pentagon. He retired from the Air Force in 2010.

Greg began a second career with the FBI in January 2010, serving as a Crisis Management Specialist in the Counter-IED Section. Greg then moved on to serve as a Mission Planner and a Management and Program Analyst in the Forensic Response Section, Laboratory Division, until his retirement in January 2020

It was during his military and FBI service that he found many of his lifelong friends. Together they learned invaluable lessons of leadership and character which crossed rank and service. His career was characterized by impeccable integrity, sincere humility and compelling leadership. Greg visited over 60 countries on 6 continents, expanding and broadening his worldview as he discovered an intense love for travel and experiencing other cultures.

Greg married Mary Bojescul on July 9, 1983. He was a loving husband and father. He saw three of his children marry and lived to meet three grandchildren. He saw many of his dreams come true. With his insatiable desire to experience new horizons, Greg set out on his next journey, which was to learn the art of sailing with the ultimate goal of circumnavigating the globe. He and Mary began living that dream in 2018. He believed that life was either a daring adventure or nothing at all. Sailing brought him great joy. He smiled, laughed and shouted, living that ambitious dream until the day he died. Those who survive him have always felt that his life brimmed with love and joy. They are eternally grateful for his person, his example and his life. They are terribly sad that he has left so soon, but remain determined to celebrate Greg by following his example to make the most of loving and living. It was - and remains - a beautiful way to be.

Greg is survived by his parents, his wife, and what he called his seven children: daughter, Amanda Walters and her husband, Kenneth of Raleigh, NC; son, Tyler and his wife, Sara Kooij of Staunton, VA; son, Nathan of Missoula, MT; daughter, Alyssa Schechter and her husband, Arthur of Chicago, IL; his three grandchildren, Holden and Ainsley Walters and Adrian Schechter. He is also survived by his sister, Janet Bennett of St. Augustine, FL; sisters-in-law, Mathilda Ortiz of San Antonio, TX, Margaret Clinger and her husband, Raymond of Navarre, FL; brother-in-law, John Bojescul of San Antonio, TX; adopted brother, Brandon Pickell and his wife, Amanda of Leola, SD; numerous cousins, nieces, nephews; and dear lifelong friends.

In lieu of flowers, donations can be made in memory of Greg to the Equal Justice Initiative, Innocence Project or to the Catholic Worker Movement. The family is especially grateful to the George Town Bahamas Sailing/Cruising Community, to Magda and José Acuña , to Vicky and Al Lohman, to Andrew Manson and FBI friends, the 310th/380th AREFS alumni, the NTNFC family and all others who have reached out to support us during this time.

The Memorial Service will be LIVE streamed on Sunday, March 14, 2021 at 6:30p.m. For the YouTube live stream, please go to Renaissance Funeral Home YouTube Page

I remember when Greg and Mary were in High School, I was at Greg's father in-iaw's house 🏡 getting my car fixed! Greg was also there too at my uncle's house. Great guy, always helpful nice kid. Polite! An Okay guy. Love John W. Sieren, CA
- Evelyn Celli

Cousin Greg certainly lived a life of honor, opportunity and splendor! We are so grateful to know that the life he lived had deep meaning and that he loved with such gusto and vision. What a wonderful example of honor, dedication, character and love to his fellow man. His legacy will live on in majesty as each of our family members remember Greg's passion for living! To Mary, Carl, Jean, Janet and all the family, we send prayers of comfort and peace at this very difficult time. Much love, Kathryn Jerrell-Wyllie Milana Jerrell Gordon Jerrell
- Kathryn Jerrell Wyllie

Greg was a wonderful teammate and a consummate professional during his DOD and DOJ careers. His influence spread far and wide and touched many, both professionally and personally. Having had the honor of working with him I celebrate his life while acknowledging your loss. His light did, indeed, touch many and our thoughts and prayers are with his family and friends. Cherish your memories and find strength and support in each other during this time. Greg - it was an honor. Fair winds and following seas, mate. Cheers.
- Bryan Goddard

Greg's candle burned twice as bright, so it is very sad to now be missing that light. He was an upstanding professional and a fine man. Our deepest condolences to the entire family and his extended circle of friends and colleagues. From all of us at the Department of Energy who worked with Greg, we wish that you find some solace with all the wonderful memories of Greg and a life well lived. Jay Tilden
- Jay A. Tilden

I worked with Greg in the last two years before he retired. I immediately experienced his kindness and his humor put me completely at ease on my very first day on the job. He was always encouraging and with all the changes and slight unrest on the job at times, his demeanor never changed. He stayed true to the kind hearted, funny, humble and inspiring person he was. Even on his sea travels he'd take the time to drop me a line, just to say hello to see how I was doing on the job, in school, etc. He will be truly missed. It was an absolute joy to know him. - Lisa McCallister
- Lisa McCallister

Greg was kind, smart and a gentle man. I enjoyed seeing the adventures you all experienced. My heart ❤💙💜goes out to you Mary and your family. Please remember him with joy, knowing the love you two shared. I hope having your children, grand-children near along with your siblings, their families and your cousins will help you during this difficult time. God bless all of you. Love, Evy
- Evelyn Celli

Greg was just a great all-around guy, an awesome crew member and true professional. Despite the hurt of this profound loss, thinking of him across the many years since we had been together always brings a smile to my face. Our hearts, thoughts and prayers are with the whole family. It is clear how deeply you all love him and each other, and there can be no greater tribute. To Greg - fair winds and following seas my friend.
- Reinhard Foerg