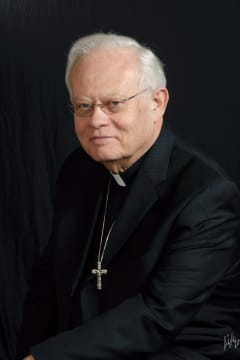 It is with great sadness that we announce the passing of our former Rector, Gerard Alexander Pisani, Jr. on March 13, 2021 at age 82. Gerard served as Rector of Trinity Parish in Bergen Point from September 1975- August 2009 as its sixteenth and longest serving Rector.

He is survived by his life partner (for 52+ years) and husband (since 2013 when it became legal), Dwight Tintle; his sister, Ruth Ehrman and her husband, Ed; Ruth and Ed's two children- niece, Tina Milliken and her husband, Chris and nephew, Jason and his wife, Janet; and aunt, Joan Pisani, as well as many cousins.

Many who new Rev. Pisani can tell you he was a self proclaimed "Gadget King" and was the first Rector to bring Trinity Parish into the world of computers. With his help and guidance we began to open our doors to people of all faiths. We also began opening doors to the community with ministries such as: Bringing people from nearby citizen housing to the Parish for a meal and fellowship, and a second program called "Tel-a-friend" which had Parishioners answering phones to help those who were lonely, without someone to talk to, and the eventual incorporation of Windmill Alliance, Inc. Our first project created in response to the lack of services available to the developmentally disabled adult population — there was literally nowhere for them to go and nothing for them to do after leaving the educational system. Thus the WINDMILL CENTER — Where Independence Nourishes Dignity Mid Inspired Lighthearted Labor! — was born. (Lord knows he LOVED his acronyms). Other programs were created to meet the needs of the community such as: Supportive Living (an apartment building) for those participants in the Windmill Center that needed a place to live after their caregivers passed, a 5000 square foot warehouse thrift shop called HIGHWAYS for clothing and social services, Arts at Trinity providing concerts monthly for the community, providing space for various Anonymous organizations like AA, NA, and Recovery, and several “private” individual counselors to use church space for their clients. Trinity was and still is a non-sectarian — all people are welcomed without discrimination. No religion is promoted; all are respected.

His many years of service to our Church, our Vestry and to the Community are gratefully appreciated. His accomplishments throughout the years are immeasurable, and his presence throughout our faith community will be sorely missed.

Eternal rest grant unto him, O Lord, and let light perpetual shine upon him. May the souls of all the faithful departed, through the mercy of God, Rest In Peace. Amen

A Memorial Service will be planned sometime in late 2021 or early 2022, post-Covid. Memorial Donations may be made to Trinity Parish, 141 Broadway, Bayonne, NJ 07002. In memo line please put “Trinity Endowment Fund”. Thank you.

(Just an FYI. His passing was not Covid related.)