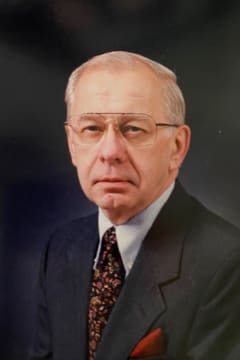 Mr. Francis Edward Dorsch passed away on September 1, 2021. The son of John and Mary Dorsch, he was 88 years old, and born on April 24, 1933, in Portage, Pennsylvania. He attended schools in Portage, and graduated from High School in 1951, at which time he joined the U.S. Navy. He served for four years as a flight crew member on a seaplane with patrol squadron VP-49. Based in Bermuda, the squadron patrolled from Trinidad to Newfoundland.

After discharge from the Navy, he worked in coal mines and steel mills while attending Pennsylvania State University. He graduated from Penn State with a BS in Electrical Engineering. Later, he obtained a Master of Science in Business Administration from the University of North Carolina at Greensboro.

Upon graduating from Penn State, he was employed by Western Electric Co, a subsidiary of American Telephone & Telegraph, as a Field Engineer in support of the Navy’s Under Sea Surveillance Program (SOSUS) and traveled world-wide. He remained with the program for 36 years and retired in 1995 as the AT&T Director of the program.

He loved traveling, meeting people, and locating good restaurants no matter where he went. His hobbies were flying and gardening. He was an FAA certified pilot and a Master Gardener.

He was preceded in death by his wife of 59 years, Stephanie Rose (McCall) Dorsch, also from Pennsylvania. He is survived by his four children, Shawn A. Dorsch and wife Hisako, of Charlotte, Francesca R. Dorsch and her husband Tim Wehner of Winston-Salem, Kate Dorsch and Mara A. Larson of Raleigh, and his granddaughter Hazel Rose Larson, and his younger sister Joan Natale and her two sons James and Mark of New Jersey.

The Funeral Mass and interment were held at St. Leo the Great Catholic Church in Winston-Salem, North Carolina on September 14, 2021, at 11:00 am, followed by military honors.

Donations can be made to Note in the Pocket