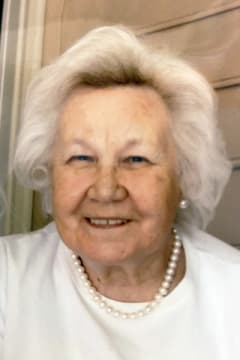 Frances M. Perlini, 92, of Raleigh, NC passed peacefully onward in her journey on Thursday, November 26, 2020. Frances was in hospice care with an excellent team from Traditions LifeCare for the past several months, which allowed her to stay in her home as she had wanted. Frances also had extraordinary care provided by her caregiver, Olena Kyrylchuk for the past several years.

Frances was born in Bridgeport, CT on May 25, 1928 to late Francis Caplankas and Theresa Yuchas Caplankas. In 1946, she married the love of her life Americo “Mac” Perlini. After their eldest son, David, was born they moved to Fairfield CT, where they were blessed with two more children, Richard and Debora.

Frances had a long career with Howland’s and then Steinbach department store in Fairfield. She retired as a department manager in 1990. She then developed the talent of quilting. With her involvement in the Connecticut Piece Makers Quilt Guild, she began designing and producing beautiful quilts for her family and friends, and where she made many life-long friendships.

After her husband passed in 2000, Frances decided to leave Fairfield and moved to Raleigh, NC, to be closer to her son Richard and daughter-in-law Katie (Brennan). In Raleigh, Frances continued sewing by volunteering to repair costumes for a little theater in Raleigh for several years.

Services will be announced and held at a later date in Fairfield, CT.

Frances always wanted to give food “to the children.” To honor her wish, please consider a donation to the Food Bank of Central and Eastern North Carolina https://foodbankcenc.org/.

Deborah Perlini and Family. My heart goes out to you and the family at the transition of your mother. I pray that the Grace of Our Lord Jesus Christ will give you all peace and comfort during this difficult time. Praying for all of you.
- Leon Troutman