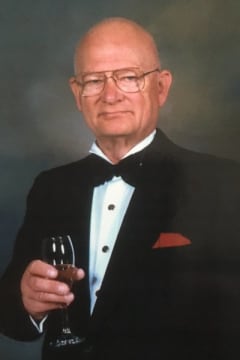 Enn Aro, 87, of Raleigh, NC died on October 5, 2020 at his home after a long illness. Enn was born in Tartu, Estonia, the son of the late Johannes and Regiina Ȁro.

When he was eleven years old, he and his family fled the invasion by Russian forces and spent the next several years in displaced persons camps in Germany, where he continued to study in Estonian school. After the war, Enn and his family emigrated to Sweden where he studied for his bachelor’s degree at NKI Skolan. In 1953 he joined Korporatsioon Rotalia, an Estonian Academic fraternity, and remained a lifelong member. Enn went on to do his master’s in electrical engineering at Chalmers University of Technology in Gothenburg. After graduation he began working for L M Ericsson in Stockholm. He then came to the US to work for North Electric Company, owned by Ericsson. Enn also worked for a short time in Washington, DC with System Science Corporation and took courses at Columbia University in New York City, before going back to ITT, which had bought North Electric, as Technical Director and finally as Assistant Vice President of Research and Technology. He first worked in Delaware, Ohio and then came to Raleigh, North Carolina. Enn continued his work at Alcatel, which bought ITT, both in Belgium and Raleigh, until his retirement as Associate Director of Access Projects.

After retiring, Enn traveled around the world with his wife, exploring new and exotic places. Along the way he collected beautiful pieces of art which adorn his home. He enjoyed music as well as spending time at his vacation home in the mountains of North Carolina.

Enn is survived by his wife of fifteen years, Virve Tellissaar. Besides his parents, he is pre-deceased by his brother Mati Ȁro.

***Mask wearing will be REQUIRED by all guests at all times***

We will remember Enn always as a calm and wise person we have the honor to know. Our deep condolences to Virve! Stay strong with all the great memories together.
- The Tars Family