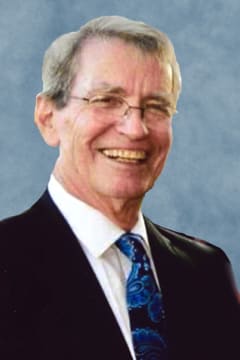 Phil died peacefully in his home after months of declining health. He died as he lived with grace and dignity, cared for by his loving wife, Betty, and his amazing caregiver, Holly Hayes. His positive nature and wry sense of humor never wavered.

Phil met Betty Hatcher Waldo at Pullen Baptist Church where they both attended the same Sunday School class and Phil sang in the choir. Their love and dedication to each other was obvious to all who knew them. Phil’s parents , Edith May Gist and Paul P. Miller provided a loving home for him and his four brothers in Tulsa Oklahoma.

Upon graduation from Will Rogers High School, he received a full scholarship to Yale. He graduated from Yale University and then Columbia University College of Physicians and Surgeons. He interned at the Roosevelt Hospital in NYC, and he spent four years in Germany as a Captain in the US Army Medical Corps. Back in NY, he trained at The Hospital for Special Surgery. From there he received an invitation to join the doctors at Raleigh Orthopedic Clinic. He accepted, moved to Raleigh, and relished the work and the friendships he made there until his retirement.

Phil was a gentle, humble soul of great wisdom. He was an excellent surgeon, who took time with each patient. He taught himself to sail, sew, and build beautiful furniture. He built ramps for the disabled at Resources for Seniors. He created a group of retired men at his church to do repairs—the Handy Corps. He did woodworking projects for the church, his family and his friends. Phil had a passion for reading and learning. He never turned down a game of cribbage; he and Betty played every night. He played golf once a week. His favorite place was at Smith Mountain Lake with his friends.

Betty would like to extend a special thanks to Phil’s live-in caregiver for her friendship and dedication for 2 1/2 years as his health declined. In the week before his death her 24 hour vigil was a true gift of compassion.

There will be a small memorial service at Renaissance Funeral Home on 7615 Six Forks Rd in Raleigh on September 24 at 2:00 PM. In lieu of flowers, the family requests that any memorial gifts be made to Transitions Life Care, 250 Hospice Circle, Raleigh, NC, (919) 828-0890.

“Grieve not. Nor speak of me with tears. But laugh and talk of me as if I was there beside you…I loved you so…‘twas heaven here with you.” -Isla Paschal Richardson