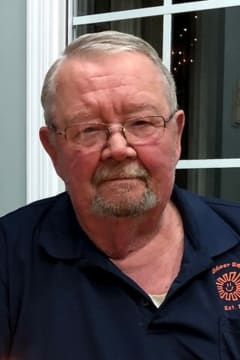 Donald Grahame Hess, age 76, passed away peacefully while surrounded by his family on Thursday, July 29, 2021, due complications from fall-related injuries. He maintained his quick-witted sarcasm to the end as he told everyone who examined his bruises, “You should see the other guy”. Determined to make people laugh, Don was a repository of inappropriate jokes, none of which should be printed here or anywhere…ever.

If you’ve lived in Raleigh for any length of time, you may have known Don. According to his daughter, he ran into someone he knew everywhere they went. Don graduated from Millbrook High School in 1964, albeit just barely. After multiple proposals, he finally convinced his high school sweetheart, Vaneda Dobbins, to marry him in 1967. His devotion and loyalty to his bride sustained their marriage until she passed in 2011, despite her fiery personality and propensity to overcook everything. Don served for six years in the Army National Guard, apparently doing some cool stuff that he never really talked about.

You may have known him as the owner of Wilson’s Outdoor Equipment, a staple in downtown Raleigh since 1968. Or you may remember him for his pig cooker pit master skills and ability to make you feel like family.

Lover of the outdoors, fine cigars, chocolate milkshakes, loud music (much to his wife’s dismay), and his ruby red Ford Mustang; Don was an amazing man who will be dearly missed by his family and friends. He will be lovingly remembered by his daughter, Heather Barlow and her husband, Michael; his brother, Jimmy Wilson and his wife, Cecile; his grandchildren, Austin and Cameron Pope, Vanessa Barlow, Rhett Barlow and his wife, Krystal, as well as his great-grandson, Alessio. He was preceded in death by his bride, Vaneda Hess and his brother, Richard Hess.

His memorial service will be held at 2:00 p.m. on Wednesday, August 4, 2021 at Millbrook United Methodist Church in Raleigh. It will also be recorded and available on the church’s YouTube channel for those who cannot attend in person.