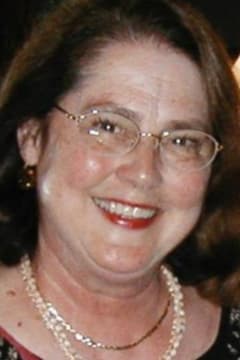 Carolyn Noble Stidham died on September 14, 2022, after a long illness. The oldest of four children of Preston Riley Noble and Frances Pauline (Wilson) Noble, Carolyn was born on September 10, 1941, in San Antonio, Texas. Her father's Air Force career took the family from Texas to Japan, Germany, and France, where she graduated from the American High School in Verdun in 1959.

Carolyn majored in English and French at Brigham Young University, then taught English at Campbell High School near San Jose, California. On a blind date in December, 1965, she met Shaler Stidham, Jr. (Sandy), a Ph.D. student at Stanford University. They married in April of 1968 in Stanford Memorial Church and moved to Ithaca, New York, where Sandy taught at Cornell University. In Ithaca Carolyn gave birth to two daughters, Christiane and Dana, took courses in English and film studies, and directed the TOEFL program and the host family program for foreign students at Cornell.

In 1975 Sandy joined the faculty at N.C. State and the family began a new life in Raleigh, interspersed with sabbatical years in Denmark (Aarhus and Copenhagen), England (Cambridge), and France (Sophia-Antipolis). Carolyn gave birth to their third daughter, Ann-Elise, in Copenhagen. In Raleigh, Carolyn devoted herself to education, the arts, and community service. Under her leadership, the P.T.A. at North Ridge Elementary School was named best in the state. Carolyn was a docent at the N.C. Art Museum and President of Creative Exchange, which later became United Arts Council. She was on the board of the N.C. State Gallery of Art and Design, Chair of the N.C. Symphony subscription campaign, and a member of Raleigh Fine Arts Society and the Carolina Ballet Board and Dancer Committee. Carolyn founded and directed Triangle Travelers, a tour group for international visitors. She was director of adult education at Pullen Memorial Baptist Church, and volunteered as a mentor for elementary school students from troubled families. One of them became a lifelong friend. Together Carolyn and Sandy received the Business Support of the Arts (Individual) Award from United Arts in 2006.

A summer in 1967 taking courses at the University of Hawaii sparked in Carolyn a lifelong love of Hawaiian culture. Carolyn and Sandy frequently visited the island of Kauai and became friends with native Hawaiians from Ni'ihau (the "forbidden" island). They were invited to many celebrations (and, sadly, some funerals) where they were often the only ha'oles.
Carolyn was a loving wife, mother, and grandmother.

She is survived by her husband Sandy, daughters Christiane Stidham (Raj Iyer), Dana Raborn (Craig Raborn), Ann-Elise Stidham (Olivier Munier), Chinese "daughter" June Xiao, and six grandchildren, as well as her aunt Winnie Hodges, brother Raymond Noble, and sister Susan Binkley (Steve). She was preceded in death by her parents, uncle Robert Wilson, sister Janis Noble, and aunt Martha Jeter (who died the same day as Carolyn). The family are grateful to Agnes Banya, who lovingly cared for her, The Cardinal Skilled Nursing Facility, and Transitions Life Care. Gifts in memory of Carolyn may be made to:
Transitions LifeCare
N.C. Symphony
N.C. Museum of Art
or
Carolina Ballet.