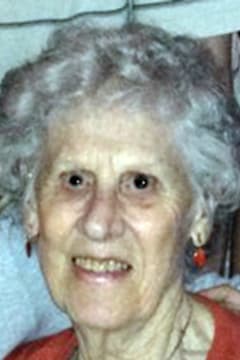 Was born in Dayton, Ohio to Marie Brinkman Trick (an accomplished concert pianist) and Samuel Trick (a beautiful tenor).
At age 12 mourned the death of her beloved, talented mother.

Spent her childhood on a farm in Ohio with eight siblings—Angie, Ed, Clairie, Virgie, Al, Carmie, France and Jerry)—all of which have passed but her baby brother, Jerry Trick.
Worked hard at farm chores and played hard with siblings.
Was Salutatorian of her high school class. (Earned the right to be Valedictorian but the school said that honor must go to a boy!)

Spent her adult life with her husband of 61 years, Tommy (Harold), until he died in February, 2007. Helped her husband build a successful printing business and worked as typesetter and bookkeeper for it until she retired.

Rejoiced also in chocolate and bridge!

Found the home of her dreams on Lake Lure in North Carolina and spent 30-plus retirement years living a good life there—playing golf and bridge, volunteering for the town and hosting family events and summer weeks with the grandkids that created enduring memories for each of them.

In 2011, found friendship and fun, security and contentment in her final home at Magnolia Glen, arranging bridge games and flowers, going to balance works & Trivia and taking advantage of anything MG offered that peaked her interest.

Anita was a great joy and inspiration to those of us who knew her, grew up with her, spent time with her. She was the eternal optimist with a true zest for life. We miss her, honor her, and keep her in our hearts always.

A farewell-to-Anita celebration for family and friends will be at Magnolia Glen October 17, 2022 at 2:00 pm. Anyone wishing to honor Anita with something other than their presence may send contributions to Transitions LifeCare.

A farewell-to-Anita celebration for family and friends will be at Magnolia Glen October 17, 2022 at 2:00 pm. Anyone wishing to honor Anita with something other than their presence may send contributions to Transitions LifeCare.