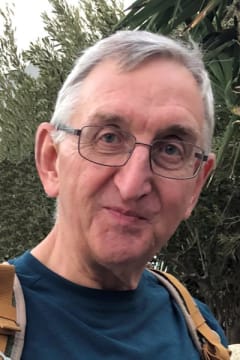 Dick is survived by his son Kelsey Novacek, daughter Katherine Novacek, and brother Robert Novacek (Sharon). He was predeceased by his wife of 35 years, Ruth Marie, in 2010. He was the son of Henry and Marcella (nee Nemastil) Novacek.

Dick was a man who, together with his beautiful and loving wife, raised two successful and devoted children. He was a loving family man, hard-working individual, and devoted friend. He showed everyone respect, exuded positivity, and was outspoken about the truth. His kindness, humor, and passion for his faith will be deeply missed by his family and friends.

In recent years, he planned challenging adventures and set impressive physical goals. He was an accomplished walker, tackling many demanding physical feats including spending six months in Europe to hike the entire length of the Campo de Santiago religious trek in Spain and various treks throughout the United Kingdom.

In lieu of flowers memorial donations may be made to the following programs: The Veteran's Affairs/Veteran Services of Knights of Columbus at St. Francis of Assisi Assembly #3552
or
Operation LAMB (Least Among My Brethren)
to help organizations assisting those with intellectual disabilities.

To the Novacek family and my brother knights: I went to high school with Dick at St Peter Chanel HS. He was a good influence on the guys we hung with and me. I will pray for him and you during these trying times. May God's blessings be with you forever. Vivat Jesu
- Carl Haaser
I met your Dad through many Meetup hikes and was always happy to have him as a hiking companion. His feats in his later years were impressive and he always talked proudly of you kids! He will be missed! Charlie Wilkins
- Charlie Wilkins

Katie and Kelsey, We were very sorry to hear about your father's death. We send our condolences and much love, Barbara and Gordon
- Gordon Still
To the Novacek Family, I had the pleasure to work with Dick at TRW. Always a gentleman and a good leader. God rest his soul. God bless, Michael Stefan
- Michael Stefan