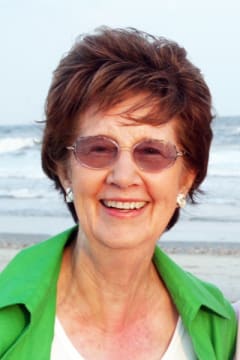 Mary Ann O’Brien Oppold joined her husband Jim in Heaven on November 11, 2020. Her journey started on a farm outside of Geneva, Iowa, and took her around the world and ultimately settling in North Carolina. She was blessed to be part of a large and loving family, including nine siblings. She married James “Jim” Oppold on August 18, 1956. They spent 46 happy years together until Jim’s death in April 2002. She was able to spend the last eight months of her life living with family. She cherished the time with family though she missed her dear friends in Raleigh.

A life-long educator, Mary Ann shared her passion for reading and storytelling with all those she met. After receiving a degree in education she taught elementary education in six states. Much to the surprise of her grandchildren, she taught computer skills at Our Lady of Lourdes in Raleigh, North Carolina. A highlight of her career was establishing the Martin Luther King Junior Day Care in Gainseville, Florida, which remains open as part of the community today.

One of her favorite pastimes was playing cards, especially bridge and Crazy 8s, and she was always more fun to be around when she won. Her grandchildren will note that if the cards were against her, she often got creative in rule interpretation. She was also an unwavering Democrat, beginning her political engagement by stumping for John F. Kennedy in the 1960 campaign, and ending by ensuring every vote, including hers, counted for Joe Biden and Kamala Harris. For thirty years, some of her most precious moments were spent at Holden Beach, North Carolina, with a large crowd where all present were considered family.

She was an active member of St. Raphael’s Catholic Church in Raleigh since 1985, serving as Eucharistic minister, president of the Altar Guild Society and a member of the Disciples Bible study group. Those friendships were invaluable.

She is survived by her four children, Teresa Isaacson of Raleigh, Anne (Paul) Healy of New Bern, Jim (Julia) Oppold of Indianapolis, and Paul Oppold of Charlotte, her eight grandchildren, Emily Isaacson, Nathan (Anna), Phillip, Angie, and Jack Healy, Natalie, Austin, and Christine Oppold, and Scout Oppold, and three of the most amazing great grandchildren, Ava Grace, Izzy, and Baby Joe. She is also survived by her sister Julia Kastner of Sheboygan, Wisconsin, sisters in law, Ruth Scallon, Sally O’Brien and Gladys Oppold, and a multitude of nieces and nephews.

In lieu of flowers donations can be made to The Southern Poverty Law Center.

A private Mass will be held on Friday, November 13, 2020at 2:00 pm at St Raphael the Archangel Catholic Church in Raleigh, NC.

Immediately following, at 2:45, the public is welcome to join the family for the Rite of Committal at the columbarium at the church.