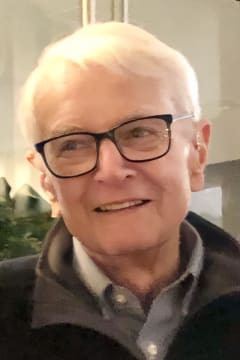 Fred was born December 2, 1929, in Teaneck, NJ, a son of Dr. Frederick Dilger, MD and Catherine Rutledge Dilger. Fred graduated from Fordham Prep High School, Bronx, NY in 1947, and from Georgetown University, School of Foreign Service, Washington DC in 1951. He served as an officer in the Marine Corps during the Korean War. While stationed in Quantico, VA, he married his beloved, Patricia Ann Campion of Worcester, NY.

After his time in the Marine Corps, Fred began a successful career in computer systems development. A series of job changes gave him and his growing family an opportunity to move around the country, creating lasting memories in each city they called home. Fred eventually went on to start Global Software in Raleigh, which he led with not only his vast knowledge and insight into the computer software industry, but with an innate ability to lead with intellect and compassion. This was so indicative of the foundation of his character.

Fred retired in 1989 and spent many years enjoying the Myrtle Beach area, dividing his time between boating, sport fishing, and relaxing with his ever-growing family. He enjoyed nothing more than a glass of wine, good music, and the company of his adoring family as he shared stories of his life, with wit and wisdom.

The Mass will be live-streamed and can be viewed by visiting this link: Funeral Liturgy for Frederick G. Dilger, Jr.