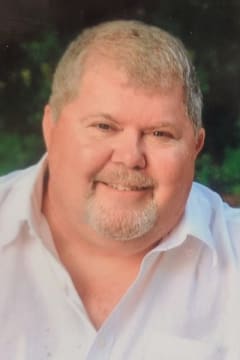 On the morning of Wednesday, March 10, 2021, Rick Beller, devoted and loving husband, father of six, and granddaddy of two passed away peacefully at his home at the age of 63.

Rick was born on April 9, 1957 in Cincinnati, Ohio to Robert and Marie (O’Hagan) Beller. His father worked for IBM which moved the family to Endwell, New York before a transfer to Raleigh where Rick and his siblings would spend the rest of their childhood. Rick graduated from Sanderson High School in 1975 and attended North Carolina State University where he became a lifelong Wolfpack fan. He worked in the construction and building supply industry for over 45 years, most recently at 84 Lumber. On September 26, 1981, he married Josette Baffaro, and they raised six children - Kristin, David, Lauren, Joseph, Christopher, and Anna Matea.

Rick and Josette fell in love quickly in their early twenties. They began dating over Thanksgiving weekend, were engaged on Valentine’s Day, and married in September - all within the same year. They knew right away that they were meant to love each other, and they enjoyed a loving and full life together for 39 years. Rick was a loyal and doting husband to Josette and a dedicated father to his children. When they were younger, he spent numerous nights and weekends attending Scout meetings, on camping and marching band trips, and at athletic events. Rick and Josette spent many weekends tailgating with their friends before N.C. State games, and while he was happy to cheer on any Wolfpack team, Rick most enjoyed football, basketball, and baseball games. He enjoyed being outside, hunting, and cooking on a grill and spent many evenings on his back deck Spring through Fall with his loyal companion Cooper, the family’s black lab. Rick was known for his contagious sense of humor, his strong instinctual perceptions of people, and honesty. He enjoyed a life full of laughter, time spent with friends, boisterous family dinners, and cuddles from his grandchildren.

Rick was preceded in death by his father, Robert; his mother, Marie; his brother, Bob; and his father-in-law, Louis Baffaro. He is survived by his wife, Josette; his six children, Kristin, David (Amanda), Lauren Binanay (Dave), Joseph, Christopher, and Anna Matea; his grandchildren, Chloe Binanay and Charlie Beller; his mother-in-law, Matea Baffaro; his sisters, Mary Wall and Suzanne Whisnant and his brother, Lenny (Kim); his eight nieces and nephews, including his godson, Kevin Beller; and lifelong friends Jim and Kathy Deal.

Due to community restrictions, the funeral mass will be live streamed by St. Raphael’s Catholic Church in Raleigh, NC on Monday, March 15, 2021 at eleven o'clock in the morning.

The family would like to thank Rick's work family at 84 Lumber for their kindness and support during this very difficult time. Additionally, they wish to express gratitude and appreciation for Rick's care team from Transitions LifeCare for the compassionate care they provided him. In lieu of flowers, donations can be made in his name to Transitions LifeCare-Raleigh or a charity of your choice.

Josette - My sincerest and deepest sympathy to you and your family. You are all in my prayers at this time of sorrow.
- Terry Polino
I am so sorry to hear of your loss. Rick was such a kind man, and no one in his presence could help but smile. We are keeping your family in our thoughts and prayers. Love, Sarah and Jason Ipock
- Sarah Ipock
Josette, your family is in my heart today as you mourn the loss of Rick (sorry my previous note said David). May his life have been such a blessing to carry you forward. Nancy Dye
- Nancy Dye
So very sorry to hear of Rick's passing. He was a good fellow. God bless you Rick; God bless your family. John House
- John House

Josette and all the Beller's. We are so sorry to hear about Rick's passing, and our prayers are with you all. Had many great memories coaching baseball, umping, and having a few cocktails with Rick . My boys loved"Ricky B"! With deepest sympathies for your loss, Fred Leach and family
- Fred Leach

Dear Josette and family, I was deeply saddened to hear the news about Rick. He was such a wonderful light of joy, happiness and love in our world! I am hopeful that the loving memories you shared with him will bring comfort to you all in time. His light will live on in all you - and the love you all shared as a family with be in your - and our - hearts forever! Much love from our family to yours, Jana (SanGiovanni) Kreger
- Jana (SanGiovanni) Kreger

From the Dye family to the Beller family, our sincere condolences in your loss of David. We share many happy memories of our years in Girl Scouting. Nancy and Dan
- Nancy Dye

I am SO sorry to here this. Rick and I worked together for several years. We had some good times and he made me laugh almost every day. He had a way of making the best out of any situation and made the day go by quickly even on a bad day. The world needs more like him and will miss him not being in it Rick Mitchell
- Rick Mitchell
So sorry to hear of Rick's passing. Your family will be in our thoughts and prayers.
- Tim & Beth Dean

So sorry to hear about Rick. We enjoyed every association We had with him. Should you need anything the Garrisons stand ready to help. Just give us a call. Your friends and brother and sister in Christ - Jeff and Vicky
- Jeff Garrison

Dear Josette and family, Rick was the best dad for his family. He and Josette worked together to give their family many joyous and memorable moments. His attitude about life, his caring and loving manner will live on in our hearts. If you know his children you will know him. All of the family members are examples of loving people. Everyone will miss his contagious smile and mischievous laugh and jokes. Good bye Rick, you now will protect and watch over your family from heaven. We love you, Aunt Marie and Uncle John Paul
- Marie SanGiovanni

So sorry to hear of Rick's passing. Keeping you all in our thoughts & prayers.
- Earline & Radjuel Geiger

I am so sorry to hear this news. Rick was pure laughter and joy to be around and my memories of our times together are pure happiness. Please accept our condolences and we are saying prayers for all of you.
- Michael Swanson

Josette and family, so sorry to learn about your loss. Deepest condolences to you all. Deacon Brian and Mary Beth Phillips
- Brian Phillips

Josette, I am so sorry. Love,hugs,and prayers for you and your family. Mickey Hale and family.
- Mickey Hale

Josette, Kristin and family, you are in all of our thoughts and prayers. Sending positive energy and love to you all. The loss of a loved one is hard but know he is watching over his growing family with pride and love. He will always be guiding and shining his light. Thinking and praying for you all!
- Donna Liefer
To the Beller family, my deepest condolences and heartfelt sympathies. Rick was such a joy to know and brought such kind and loving friendship to my parents over the years. I wish you all peace during this difficult time, you are in my thoughts and prayers.
- Hannah Mitchell

Sending so much love to a strong and ever-loving family. Mr. Beller will be missed so much and his goodness will continue to live on through all his family. I wish everyone well during this time of remembrance.
- Michelle
Rick was one of the first friends I made (thru Jimmy Deal) when I arrived from Chicago to attend NCSU in 1975. Along with my friends Donna, Betsy and Sharyn (Pee Wee), we had so many fun times with them. Rick was quick witted, smart, kind, among other good things too numerous to mention. I am still very close with those "girl" friends. We are all saddened by this news, but happ to know he had such a large,.loving family. Our deepest condolences to you all.
- Mary Beth Jevitt
Oh Josie and Bellers said f all ages! We are so sorry to hear of Rick's passing. What a breath of joy he was—whether working, playing or leading your wonderful family, Rick was always a welcome sight! He will add extra joy and laughter to praising our Lord in heaven. May peace find you and comfort you. Many hugs from Brug and Howie Jung
- Howie and Brug Jung

Beller family we love y'all so much. Words just can't explain it. But y'all know. My second family. We are praying for y'all and here if you all need anything. Mr. B was an amazing man and I have million of memories growing up with him and y'all in our lives. He will be greatly missed. I remember 4th of July night my dad and Mr. B drinking that wild turkey and just enjoying life. Love Allison and the family.
- Allison Corpuz

Rick enriched our lives and will be very much missed. Our hearts go out to the entire Beller family. Brenda and Jim Elshof and family
- brenda elshof

My memories of Rick are filled with a warm heart and belly laughs. He gave the best hugs and the love he had for Josette and his family shined bright in his sparking eyes. Sending love and prayers to all of you until we are all together again. Love, Lara
- Lara SanGiovanni

Rick and I met as fellow K of C members in the Fr. Thomas Price Council. We shared many nites and afternoons with the council softball team. Also some memorable trips to KofC State golf and Softball tournament's. I can remember well when he met the love of his life Josette. They were truly soul mates. Josette words cannot express our sympathy at this time of loss. You and Rick have been in Our prayers daily for a lot of years and will continue there as long as we are able to pray. Rick was a Good man and a great companion. He will be truly be missed by all of us who had the privilege of knowing him. Jack & Kathy Frey
- Jack Frey

- Mike Jolley
Josette, Kristin and family, I am so sorry for your loss. In the days, weeks and months ahead always remember all the great times you shared as a family. Sending lots of positive thoughts and prayers.Heaven gained another angel. Debra Santoni
- Debra Santoni

I am so terribly sorry for your loss. Josette, i am keeping you and your family in my thoughts and prayers.
- Debbie

Our sincere condolences and prayers for the Bellar family. Rick was always great to be around and I really enjoyed it whenever I ran into him whether on the street or in Church.
- Deacon John Wetsch & Family

Very sorry to hear this. Such a good man Rodger Skirvin
- Rodger Skirvin
I'm so sorry for your loss. Praying the God of all comfort helps you at this difficult time. (Psalms 83:18 2Corinthians 1:3,4). Jesus told us to pray for God's Kingdom because the Bible promises it will do away with death. (Revelation 21:4 & Daniel 2:44).
- Mary