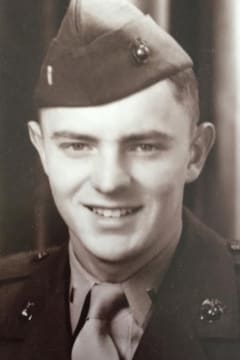 Charles “Charlie” Copeland, Jr. passed away April 25, 2021 peacefully at home at the age of 91. Charles was born September 12, 1929 in Greenville, SC, and was the only son of the late Charles and Hilda Copeland. Charlie is survived by the love of his life, Dorothy “Dot” Hatfield Copeland, who he married in 1952 and enjoyed 68 years of marriage together. Charlie is also survived by his loyal 12-year old English Bulldog, Fancy.

Additionally, he is survived by his children; son, Charles “Bryan” Copeland and his wife, Mary Beth; and daughter, Kathleen “Kathy” Copeland Williams and her husband, Shaughan, all of Raleigh. He was so proud of his surviving grandchildren and their families; Megan Copeland Hazzard of Richmond, VA; Barton Hatfield Copeland (Audrey) of Charlotte, NC; Rebekah Williams Sullivan (David); Sarah Williams Starkweather (John); Mary Williams Kanode (Colby) and Michael Joseph Williams, all residing around Raleigh, NC. Charlie is also survived by 8 great-grandchildren, with 2 more on the way.

Charlie graduated from Greenville High School in Greenville, SC, in 1946 at the impressive age of 16. During that time he had a strong interest in flying, and got his pilots license at 14. After high school he attended The Citadel in Charleston, SC, and received his undergraduate degree from Newberry College in Newberry, SC At the start of the Korean War, Charles enlisted in the Marine Corps and later was commissioned a 2nd Lieutenant in 1951. He served at multiple locations including Parris Island, the Caribbean, Quantico and Cherry Point. After the armistice in 1953 he was released to inactive duty and returned to Greenville, SC. He ended his Marine career as a Captain with an Honorable Discharge. He was always proud to be an American and to have been a U.S. Marine, as evidenced by the many flags, ornaments, and bulldog paraphernalia. Semper Fi!

After the Marine Corps, he entered the new world of Data Processing and began an IT career that would span more than 35 years working in Charlotte NC, Greenville SC, northern VA and then locating to Raleigh, NC in 1970 to work with for the state managing systems and IT departments within the the Department of Education and the Administrative Office of the Courts. After retirement, he continued to be interested and involved with various computer hobbies involving PC’s, printers, etc., which led to a high interest in eBay and Amazon. Besides computers he enjoyed wood working and gardening tomatoes.

Some of the best times of his life were spent at their Sunset Beach, NC beach house starting in 1986 and for the next 30 plus years. He and Dot spent a lot of time enjoying the beach, tinkering at the beach house, and became close friends with a lot of other people that had houses around them. His immediate family have great memories of the times we spent with them at Sunset.

The family would like to thank the teams at Perpetual Home Care and the Hospice division of Transitions LifeCare for their support over the past couple months.

In memory of Charlie, an optional donation may be made to the North Carolina Bulldog Rescue ,the Marine Memorial Foundation , or The Bird Island Coastal Preserve.

The family will have a private family service in Raleigh on May 1, 2021 and then a future small memorial event at Sunset Beach, NC Memorial Park where he has a veterans memorial brick.

We first met Mr. Charlie 20 plus years ago when we were vacationing at Sunset Beach. Charlie never met a stranger and right away we felt like we had been friends for ever. Charlie was the kindest and generous person we have ever met. He will be missed so very much by us. This world has lost a true gentleman and we have lost a dear dear friend. Rest in Peace Mr Charlie. I hope you are eating a big bowl of Peach Cobbler!!
- Gail and Cleve Lancaster