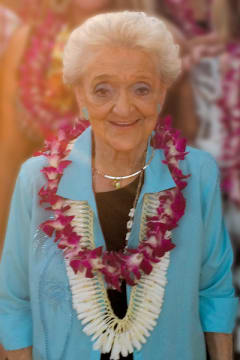 Betty Jean Adams O’Connor left this world to be with the Lord on February 14, 2021. She was born in Exeter, Pennsylvania, on September 10, 1924. Due to the outbreak of WWII, she was one of the first women to work for Tiffany & Co. in Manhattan. Betty Jean began her career as a page, sporting a mandatory page boy haircut and wore a powder blue shirt dress. She remained with the company throughout the war and eventually worked her way up to a bookkeeping position.

In 1945, on VJ Day, she married her sweetheart, John “Jack” O’Connor, a marriage that lasted for 61 years ending with Jack’s death. Betty Jean was predeceased by her husband, Jack O’Connor, and eldest son, Monsignor John “Tim” O’Connor in 2013. She is survived by her sons, Bruce, Kenneth, and Kevin. She leaves behind six grandchildren: Matthew, Megan, Michelle, Brittany, Robbie & Jamie and six great-grandchildren.

Betty Jean lived a very full 96-years, she was faithfully devoted to never exercising and made certain that she never ate a vegetable that was not “camouflaged.” She believed the secret to longevity was a vodka tonic in a tall glass with extra ice, every evening. She was devoted to family and friends and loved telling them stories of her long interesting life. When Betty Jean was around laughter and love were always present.

She and Jack moved to Raleigh, NC in 2004, and she quickly became immersed in her new community, becoming famous for large St. Patrick’s Day and Thanksgiving gatherings. Everyone was welcome at her table and no one was a stranger.

After celebrating her 90th birthday by leading a congo line in Hawaii, a special place for her, she relocated from Raleigh, N.C. to The Villages, FL to live with her son and daughter-in-law. She was a member of the Doo Wop Club for the past six years and loved listening to her son, Kevin sing Karaoke.

Above all things, she had a never-ending faith in God and an unconditional love for her family. Betty Jean will be laid to rest in Cary, North Carolina with her husband and son. 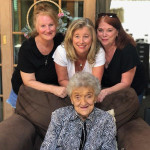 I will Always remember Jean with much fondness. Whenever together with the family we always had a lot of laughs and she certainly enjoyed living her life to the fullest. May her memory be for a blessing for always. Much love, Caryn
- Caryn Feldman

My dear friend Jean, you will be missed greatly. Thank you for being our friend and always be there when we needed your guidance, support and friendship. You were an incredible, smart and ahead of the times woman. You will always be in our hearts. - Tatiana, Tassilo and Kurt
- Tatiana Dietze

Rise with the angels and may you teach them to dance for eternity with the joy, grace, and beauty you displayed in your life. God speed you home to the awaiting arms of Uncle Jack and Timmy. xxxooo - Mary Julia
- Mary Julia

Sending love and prayers to the O'Connor family!
- Lynette OBrien

Always the Dutchess. Grace, kindness and her stunning beauty that glowed from her inside to the out. She will be missed, an inspiration to many and love to all.
- Sharon and John O’Connor